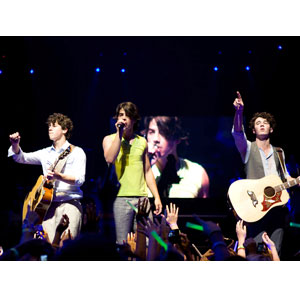 Joe Jonas says, "We love, as a band, being able to show everyone what our day is like. The film crews were there when we woke up in the morning to when we were going to bed really late at night. You get to see the full day's schedule and see how crazy our album release week was."

Scenes range from the brothers being woken at 4:30 a.m. by Head of Security "Big Rob" Feggans to being chased down streets by screaming fans and making their escape by helicopter. They are also seen performing in arenas and in Central Park, and being mobbed by frenetic admirers in Times Square.

"Those three months on tour were crazy," Joe says. "You wake up and immediately do interviews. Then you get to see really cool cities, you get to do amazing things. We'd rehearse, then at night we go to the venue around 4, do our sound check, eat, get ready mentally, warm our voices up and go on stage. Then we'd jump around like maniacs for three hours, playing our music, doing gymnastic moves, spraying the audience with foam and just trying to give the fans the best show and the most fun possible."

"Big Rob" Feggans says that in the film, "you see how hard life on the road is. And you also see how much they appreciate what the fans are giving them and how hard the brothers work for them. They're really fan oriented."

And those fans return the love, sometimes in crazy ways. "I've seen everything," Feggans says laughing. "They'll try to come in to the brothers' rooms in room service carts and laundry hampers. I've even seen them trying to come in wearing police outfits. I've seen it all."

Intercut with the film's concert footage are behind-the-scenes and off-the-wall sequences, one of which features a group called the Fake Jonas Brothers, whom Nick Jonas discovered on YouTube. Producer Art Repola says: "We flew them in and they ran around interacting with the fans. It's just a big bunch of fun. Their thing in the movie is, ‘If you can't see the real ones, why not see the fake ones?'"

Nick Jonas says, "Every moment for us is just kind of amazing, the fact that we're here right now, doing what we love, and that people love what we do. I mean it's kind of a crazy experience, and to see our amazement in the film I think is really going to stand out for the movie's viewers."