Terror comes to the Vatican in Angels & Demons 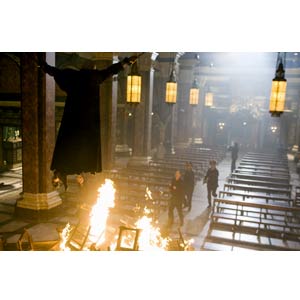 Tom Hanks reprises his role as Harvard symbologist Robert Langdon in the upcoming action-thriller Angels & Demons, which is based on the Dan Brown novel of the same name. This film will also star Ayelet Zurer as Vittoria Vetra and Ewan McGregor as Carlo Ventresca.
The team behind the global phenomenon The Da Vinci Code returns for the highly anticipated Angels & Demons, based upon the bestselling novel by Dan Brown.

Tom Hanks reprises his role as Harvard symbologist Robert Langdon, who once again finds that forces with ancient roots are willing to stop at nothing, even murder, to advance their goals. Ron Howard returns to direct the film, which is produced by Brian Grazer, Ron Howard, and John Calley. The screenplay is by David Koepp and Akiva Goldsman.

What terrifying discovery would make the Vatican turn to Robert Langdon, the man who cracked history's most controversial code? When Langdon discovers evidence of the resurgence of an ancient secret brotherhood known as the Illuminati—the most powerful underground organization in history—he also faces a deadly threat to the existence of the secret organization's most despised enemy: the Catholic Church.

Upon learning that the clock is ticking on an unstoppable Illuminati time bomb, Langdon travels to Rome, where he joins forces with Vittoria Vetra (Ayelet Zurer), a beautiful and enigmatic Italian scientist. Embarking on a nonstop, action-packed hunt through sealed crypts, dangerous catacombs, deserted cathedrals, and even to the heart of the most secretive vault on earth, Langdon and Vetra will follow the 400-year-old Path of Illumination that marks the Vatican's only hope for survival.