The end begins in Terminator Salvation 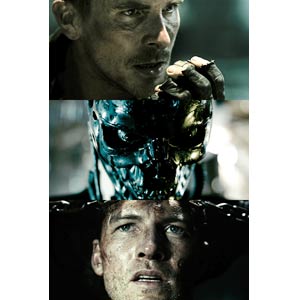 Set in post-apocalyptic 2018, the film tells the story of John Connor (Bale), the man fated to lead the human resistance against Skynet and its army of Terminators. But the future Connor was raised to believe in is altered in part by the appearance of Marcus Wright (Worthington), a stranger whose last memory is of being on death row. Connor must decide whether Marcus has been sent from the future, or rescued from the past. As Skynet prepares its final onslaught, Connor and Marcus both embark on an odyssey that takes them into the heart of Skynet's operations, where they uncover the terrible secret behind the possible annihilation of mankind.

Christian Bale was director McG's first choice to play John Connor, whom he calls "the most credible action star in the world right now." McG offered Bale the part while he was shooting The Dark Knight, and he initially turned it down. Bale told McG that if he could refine the script to the point where it could be read on stage without any special effects and still be a compelling story, he would agree to star in it.

To that end, McG brought Jonathan Nolan on board to rewrite the script. Nolan is the brother of director Christopher Nolan, and they collaborated on the screenplays for The Prestige and The Dark Knight. Anthony E. Zuiker, the creator of TV's CSI franchise, also worked on the script. With the script in place, Bale signed on to play Connor, with the option to do two more Terminator movies.

McG met with Terminator creator James Cameron, who wasn't involved in the third movie. Cameron didn't contribute to the script of Terminator Salvation, but he did recommend Australian actor Sam Worthington for the part of Marcus. Worthington also stars in Avatar, Cameron's first movie as a director since Titanic, which will be released this December.

Also in the cast is Anton Yelchin who plays the young version of Kyle Reese, who will later go back in time and father John Connor. Yelchin will also be the young Chekov in this summer's Star Trek. Bryce Dallas Howard is Kate Connor, John's wife; and Helena Bonham Carter plays the villain, Serena.