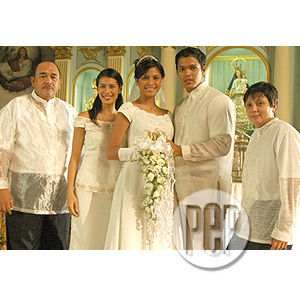 A scene from Kaleldo, one of the nominated films for Best Motion Picture-Drama.

In an emergency meeting presided by Golden Screen Awards Chairman Lito Mañago, the members of the voting and screening committee for this year's Golden Screen Awards have decided to come up with a resolution regarding the Best Independent/Digital Film Category which was initially formed last year due to the emergence of the digital revolution in local films.

In an earlier press release issued by the Golden Screen Awards for its official list of nominees, the films Kaleldo (produced by Centerstage Productions) and Ligalig (CM Films) were listed as contenders in the Best Picture-Drama category.

Since the digital technology involved in the production of Ligalig may raise issues and questions on how it was categorized, the Golden Screen jurors unanimously decided to put every film nominated on equal footing.

Kaleldo and Ligalig will be joining the rest of the nominated films mentioned as they incidentally fall on one particular genre, which is drama.

The decision on the abolition of the Best Motion Picture-Independent/Digital rose from the fact that almost every local movie being produced now is already using digital technology. The technology is constantly evolving, hence, separating the mainstream from the indies, should no longer be a source of confusion or issues in scrutinizing and analyzing the artistic merits of films.

The Golden Screen Awards' uniqueness among existing local award-giving bodies is the fact that it was obviously patterned from the Golden Globes of Hollywood. Its distinction lies on the separate categories for Best Motion Picture-Drama and Best Motion Picture- Comedy or Musical.

The supporting acting category is a mixture of drama, musical or comedy, and it is more generalized as compared to the lead acting performance categories in the Golden Screen.

On the other hand, the nominees for this year's Best Motion Picture-Musical or Comedy remain the same, and final, as what has been announced: I Wanna Be Happy (Seiko Films); Don't Give Up On Us (Star Cinema Productions); Kasal, Kasali, Kasalo (Star Cinema Productions); Manay Po (Regal Entertainment) and Zsa Zsa Zaturnnah: Ze Moveeh (Regal Entertainment).

Generalizing films limited to the drama and musical/comedy genre will, therefore, be the lone rule to be followed by qualified jurors of the Golden Screen Awards from now on. The abolition of the Best Motion Picture-Independent/Digital allows the judging of films to be more definite and precise.

Now on its fourth year, the Golden Screen Awards is being given annually by the Entertainment Press Society, Inc. (Enpress), and its 2007 TV coverage will be produced by 8 Elephants Productions, to be directed by Al Quinn, and will have a slightly delayed telecast on RPN-9.

Airtime Marketing is the marketing arm of Eight Elephants Productions and The 4th Golden Screen Awards. The much-awaited event will be held on March 17, 2007 at the AFP Theater in Camp Aguinaldo, Quezon City.