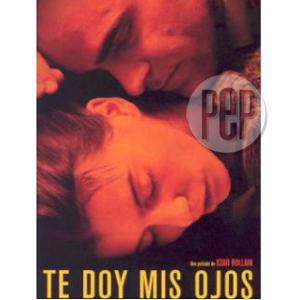 Director and co-screenwriter Icíar Bollaín's approach to Te doy mis ojos is excellent, giving the topic of spousal abuse the respect and importance that it deserves.

In the last few years, cinema done by Spanish women has grown notably, following a general trend in Spanish society. In order to celebrate Women's Month this March, Instituto Cervantes of Manila, with the collaboration of Filmoteca MAE, presents the works of five young Spanish female directors.

Unless indicated, the films are in Spanish with English subtitles.

Catch the movie that swept the Goya Awards (Spain's equivalent of the Oscars) of 2004. This is an award-winning tale of domestic abuse. Pilar is a terrified housewife on the run from husband Antonio and his regular outbursts of violent rage. Taking refuge with her sister Ana, she tries to build a new life—but she's still in love with the man who beat her. Te doy mis ojos is a powerful and moving look at the image of spousal abuse.

In Spanish with NO subtitles

Spain, 1960. Two million Spaniards leave the country forced by need. Destination: France, Germany, Switzerland and The Netherlands. Half of them are illegal immigrants who travel without a contract of employment. 80% of them are illiterate. They have to face the wall of different languages and habits. Spain, at present: other people in need knock on the doors of a prosperous nation. Almost nobody remembers the story. Josefina does. She keeps memory alive by her travel in the memory train. Destination: Nuremberg, Germany.

Ann, a saleslady of a photography shop has moved to an unfamiliar city because she wants to be near her boyfriend Bob. One day he calls her to suddenly break-up with her. Ann, who is devastated, searches for a hotline desperate people and meets Don, a volunteer who sells houses and seems unable to understand her problems.

A cadaver of a man is found naked and tied to a bed in a drive-by motel. Vila, a disillusioned psychologist-turned-cop, accompanied by his female partner Chamorro, receives orders to investigate the death. The case is closed fairly quickly and ruled as an accident. It is re-opened however when the detectives discover the body of a woman who had been partially devoured by wolves and is believed to be connected to the man's murder.

This film tells of one year in the life of a tiny village in northern Spain depicting the ordinary lives of the elderly residents. This is the first feature film documentary by Mercedes Alvarez, a promising Spanish female director who was born in the village where the picture is shot.