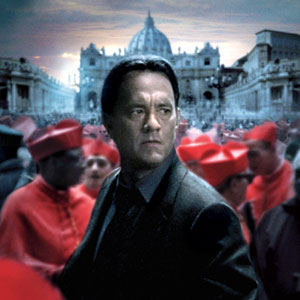 The Tom Hanks-starrer Angels & Demons has been rated R-13 by the Movie and Television Review and Classification Board.
MANILA—The adventures of controversial symbologist Robert Langdon, who once tangled with the Catholic Church in The Da Vinci Code, can now be watched by high school-age audiences!

The Movie & Television Review and Classification Board (MTRCB) review committee unanimously gave the new Robert Langdon thriller Angels & Demons a teen-friendly rating of R-13 after it previewed the Tom Hanks-starrer last April 29, according to Columbia Pictures, the film's local distributor.

An R-13 rating means any moviegoer aged 13 and above can be admitted in a theater showing the particular film. This favorable rating also allows Angels & Demons to be shown in all cinema chains across the country when it opens on Friday, May 15.

Angels & Demons is the follow-up to the thriller The Da Vinci Code whose divisive, hot-button theories on Christianity were met with uproar from religious sectors when it opened in 2006. The MTRCB gave Da Vinci Code a prohibitive R-18 rating which forbade admission of moviegoers aged 17 years old and below. Also, SM Cinemas, which has a policy against R-18-rated movies, did not show the said film in their cineplexes.

In the U.S., the Motion Picture Association of America (MPAA) granted Angels & Demons a classification of PG-13, the same rating The Da Vinci Code received three years ago.

Based on global bestsellers by Dan Brown, both Da Vinci and Angels feature the scholarly hero, Prof. Robert Langdon, who's once again played in the screen by Tom Hanks.

In Angels & Demons, Langdon discovers evidence of the resurgence of an ancient secret brotherhood known as the Illuminati—the most powerful underground organization in history. He also faces a deadly threat to the existence of the secret organization's most despised enemy: the Catholic Church. Upon learning that the clock is ticking on an unstoppable Illuminati time bomb, Langdon travels to Rome, embarking on a nonstop, action-packed hunt through sealed crypts, dangerous catacombs, deserted cathedrals, and even to the heart of the most secretive vault on earth.