Charice describes her experience while working on Hollywood film 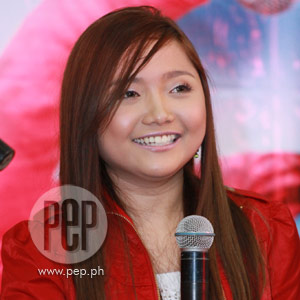 Charice will portray herself in the Hollywood film Alvin and the Chipmunks, which will be shown in the Philippines by January 2010.

The international singing sensation was also given an advanced birthday celebration since Charice will turn 17 on May 10. The simple yet elegant event took place at the bridgeway of SM Makati. The Sunday afternoon event (which toko place right after her appearance on The Buzz) also served as a pre-launch of her second album titled My Inspiration. Charice performed the carrier single of her album titled "Always You." As a bonus, she also performed "Wind Beneath My Wings" as she walked around the SM Homeworld area so she could be closer to her fans.

The 16-year-old singer then happily mingled with the guests and signed copies of her album right after the brief press conference at the venue.

PEP (Philippine Entertainment Portal) was able to interview Charice along with a few other journalists invited to the anniversary-cum-product launch.

PEP: How was it like taping Alvin and the Chipmunks?

The Filipina singer was asked to give a sample of her chipmunk voice and she gladly obliged.

PEP: What songs are you going to sing in the movie?

PEP: What was the most difficult part of doing the movie?


PEP: Are you open to acting in the future?


Charice will have a press conference tomorrow, May 5, to launch her second album under Star Records titled My Inspiration. (Click HERE to read more about her latest album.)


Aside from promoting her local album, the young singer is also busy completing her international album scheduled to be released by September 2009.

PEP: What should we expect from your international album?


Alvin and the Chipmunks will premiere on December 25, 2009 at the United States. See Charice on the big screen in Philippine cinemas by January 2010.