Angels & Demons premieres on May 15 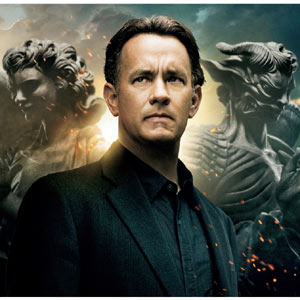 As Robert Langdon, Tom Hank (in photo) Langdon travels to Rome to embark on an packed hunt through sealed crypts, dangerous catacombs, and deserted cathedrals for the movie Angels & Demons.
Tom Hanks reprises his role as Harvard symbologist Robert Langdon, who once again finds that forces with ancient roots are willing to stop at nothing, even murder, to advance their goals, in Columbia Pictures' new thriller Angels & Demons, the much-anticipated follow-up to the 2006 blockbuster The Da Vinci Code.

What terrifying discovery would make the Vatican turn to Robert Langdon, the man who cracked history's most controversial code? When Langdon discovers evidence of the resurgence of an ancient secret brotherhood known as the Illuminati—the most powerful underground organization in history—he also faces a deadly threat to the existence of the secret organization's most despised enemy: the Catholic Church. Upon learning that the clock is ticking on an unstoppable Illuminati time bomb, Langdon travels to Rome, embarking on a nonstop, action-packed hunt through sealed crypts, dangerous catacombs, deserted cathedrals, and even to the heart of the most secretive vault on earth.

Hanks says that Langdon's impressive and arcane intellect are satisfying and stimulating to play and a big part of the project's appeal. "It's wonderful to play someone who is an expert in this very obscure field. He has made it his life's work to make the connections that nobody else can see; one symbol can represent many different divergent points of view and he can make sense of it. It's a fascinating blend of stuff.

"When we were in Rome, working in or nearby these places of great antiquity, I didn't want to know just when it was built. I wanted to know how it got there, what the original thought was, what was going on in Rome at the time this particular church was built? Who paid for it? When and why have things been added to it? One of the reasons that I'm interested in Robert Langdon is that he sees history as layered; you have to take nine other facts and nine other opinions and nine other understandings of where, what, and when humankind came up with these symbols in the first place before you can infer truth."

Hanks was also gratified by the opportunity to re-team with director Ron Howard. Angels & Demons marks their fourth collaboration, the most recent being The Da Vinci Code. "Nothing fazes Ron," says Hanks. "Certainly not shooting in front of the Pantheon in Rome with hundreds of tourists. He found small back alleys for scenes in the afternoons when it was hot and the crowds were intense. And besides, he was so focused that he hardly knew they were there. Whenever he faces a challenging shot, he just figures out a way to do it and is confident that it will work out.

"Ron has amassed an incredible body of work as a filmmaker and as he progresses, he continues to make increasingly complicated, layered movies—and he makes it all look easy. He's actually more fearless now as a filmmaker and takes much greater risks than he did when there was much less at stake. His will, his desire to completely bust open the way he makes movies keeps both of us pretty fresh."