BFF rated PG-13 by the MTRCB 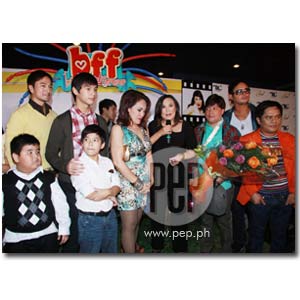 The cast members of BFF (Best Friends Forever) greeted the crowd gathered in front of Cinema 9 and 10 of SM Megamall during the premiere night held yesterday, May 12.

The premiere night of BFF (Best Friends Forever) was different from other movies since the organizers tapped two singers to serve as front acts of the main event.

Last night, May 12, moviegoers inside Cinema 10 of SM Megamall were treated to song numbers from talent search contestants Bugoy Drilon and Laarni Lozada. The two products of Pinoy Dream Academy Season 2 performed their signature songs culled from their debut albums.

Bugoy sang "Paano Na Kaya" much to the delight of the crowd. Laarni then wowed the crowd with her rendition of "Kung Iniibig Ka Niya," which is the official theme song of the ABS-CBN afternoon teleserye Kambal sa Uma. The winner of PDA Season 2 also lent her powerful voice to the song "Bakit Nga Ba Mahal Kita?"

Shortly after their intermission numbers, the cast members of BFF were ushered in front of the jampacked venue. They greeted the crowd and asked them to support their film, which is now being screened in cinemas nationwide.

Leading the cast were Sharon and Ai-Ai as well as John Estrada, the man whom they would fight about in the film. Young stars Empress Schuck, AJ Perez, Enchong Dee, and DJ Durano also graced the event along with Miles Ocampo, Nash Aguas and Carl Camo who play the children of Sharon in the film. Portraying helpers of Sharon in the film were Chokoleit and Joy Viado, both of whom took time to attend the star-studded event.

Special guests that evening were the Megastar's husband Francis "Kiko" Pangilinan and her daughter KC Concepcion who was seated near her Lovers in Paris co-star Piolo Pascual.

Among those present during the premiere night were Mark Bautista and Priscilla Meirelles, the girlfriend of John Estrada. ABS-CBN executives Linggit Tan, Johnny Manahan, Cory Vidanes, and Charo Santos-Concio made it a point to attend the premiere night of BFF, which marks the return of Sharon to the big screen after her 2008 film Caregiver.

Now that Gabby Concepcion is on speaking terms with Sharon, a lot of people were expecting to see her ex-husband during the premiere night but they were sorely disappointed. However those who will watch the film will be in for a pleasant surprise.


SYNOPSIS. Honey (Sharon Cuneta) is a housewife married to Tim (John Estrada). She gets a nagging feeling that her husband is being unfaithful. She realizes that she has not been taking care of her personal appearance so she enrolls in a gym where she meets Frances (Ai-Ai delas Alas) who has a boyfriend named TJ.

The two become BFF (best friends forever) but their friendship is tested when they find out that Tim and TJ are the same person. Can the two women still stay as BFF when they find out about the truth? Who will end up with the hunky ladies man?

BFF (Best Friends Forever) is the Mother's Day offering and 16th anniversary presentation of Star Cinema. It is rated PG-13 by the Movie and Television Review and Classification Board.