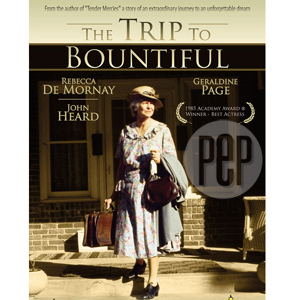 Although the film The Trip to Bountiful was set in Houston, Texas, the movie was filmed in Dallas. It is one of the films to be screened at Titus Brandsma on March 24.

Pelikula@TitusBrandsma is a free monthly film screening that features fine samples of world cinema. After every screening, film enthusiasts can discuss the aesthetic and technical merits of each film. This monthly screening is an offering of the Titus Brandsma Center-Media Program under the auspices of the Carmelites in the Philippines. It is aimed at giving a meaningful experience for film enthusiasts.

The core group of Pelikula@TitusBrandsma selects three films that correspond to a specific theme for each month. For the month of March, the chosen theme is "Ina, Kapatid, Anak" (Mother, Sister, Daughter) in celebration of Women's Month.

This month's screening will be held on March 24, 2007, from 1 p.m. onwards at the Titus Brandsma Center in New Manila, Quezon City.

Adapted by Horton Foote from his own television play, A Trip to Bountiful is set in 1947 Houston. Carrie Watts is living the twilight of her life trapped in an apartment in 1940's Houston, Texas with a controlling daughter-in-law and a hen-pecked son. Her fondest wish—just once before she dies—is to revisit Bountiful, the small Texas town of her youth, which she still refers to as "home." This is the touching story of Mrs. Watts' successful escape and last trip home.

78 mins. In Dutch with English subtitles.

Pauline is a "little girl of 66 years old." She is mentally retarded and been cared after by her sister Martha. When Martha dies, her two younger sisters, Paulette and Cecile have to make a decision on the best place for Pauline to be looked after. Neither of them is ready to take care of her. Paulette has a shop to look after and Cecile has her Albert. But according to Martha's last will, her fortune will only be divided in three equal parts if one of the sisters looks after Pauline. If they decide to take her to an institution, Pauline will be the only heir.

95 mins. In Arabic/Persian with English subtitles.

A girl in traditional female clothing, and her arm in plaster, comes out of school one day and doesn't find her mother meeting her. She decides to travel home by herself although she doesn't know her address and remembers the road only visually.

For a map of the location, please visit http://www.pelikula-titusbrandsma.ph/