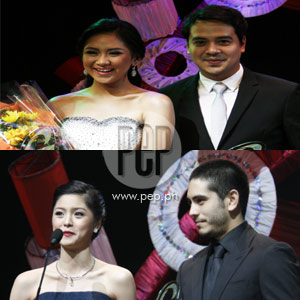 The Sarah Geronimo-John Lloyd Cruz tandem (top frame) and the love team of Kim Chiu and Gerald Anderson were among those honored in the awards night of the 40th Guillermo Mendoza Memorial Scholarship Foundation, Inc.

ABS-CBN talents John Lloyd Cruz and Sarah Geronimo were crowned Box Office King and Queen of 2008 for making a killing in the romantic comedy A Very Special Love (2008). The awards night of the 40th Guillermo Mendoza Memorial Scholarship Foundation, Inc. (GMMSFI) had its TV broadcast on ABS-CBN last Sunday, June 28. It was held last June 21 at the Carlos P. Romulo Auditorium of the RCBC Plaza in Makati City.

The rom-com, is a prequel to You Changed My Life, which wasoffered in 2009. A Very Special Love, which ran for eight weeks since it was released on July 30 last year, reportedly reaped P180 million in the box office.

John Lloyd kept the crown after winning the title last year for One More Chance, a romance drama that he topbilled with Bea Alonzo who was 2007 Box Office Queen.

Another big reaper in the awards night was KC Concepcion who, via VTR, accepted her awards for Most Promising Female Star of Movies & TV, New Female Recording Artist of the Year (Promising Singer) for her 2008 release a.k.a. Cassandra, and Princess of Philippine Movies & TV along with GMA-7 talent Richard Gutierrez.

The Film Actor and Film Actress of the Year awards went to Christopher de Leon for his role as a man dying of cancer in Magkaibigan and Megastar Sharon Cuneta for her portrayal of an OFW in Caregiver.

The hilarious and buxom star of Ang Tanging Ina N'yong Lahat, Ai-Ai delas Alas, became very excited when the nominees for the Comedy Box-Office Queen were being announced that she was already standing up even before her name was called.


Dingdong Dantes and Marian Rivera, who both received the Phenomenal Love Team award, gave their fans another reason to think about their real relationship behind-the-cameras. Upon receiving the award, Dingdong declared: "Sa lahat ng aming napasaya at napaibig, para sa inyo ito." Marian replied by raising her trophy to Dingdong, and saying, "At sa ‘yo."


Another love team that went up the stage that night was Gerald Anderson and Kim Chiu, who were hailed as the Most Popular Loveteam of Movies & TV. Kim was thrilled to announce that she and Gerald have received this award for the past three years. "Simula 2006 nang maging loveteam kami, kami na po ang napili ng Guillermo. Salamat sa inyong pagtitiwala at sa lahat ng Kimerald fans," said Kim during her acceptance speech.

MUSICIANS HONORED. Gary Valenciano, who is reviving his music career via a series of concerts, took home the Male Concert Performer of the Year award for the Gary Live@25 concert tour.


Two Filipino singers were honored with the Outstanding Global Achievement by a Filipino Artist award. Arnel Pineda received his awardvia VTR from Europe, where the vocalist is now on tour with the American rock band Journey.

Charice Pempengco, who has achieved international fame at the tender age of 17, was also honored with the award.

The Guillermo Memorial foundation, which is also a scholarship foundation, annually hands out the awards to filmmakers, actors, television directors and screen writers who make an impact in the box office and TV ratings.

Here is a complete list of the winners of the 40th Guillermo Box Office Awards:

Female Concert Performer of the Year- Sarah Geronimo (The Next One)

Female Recording Artist of the Year - Sarah Geronimo (The Next One)