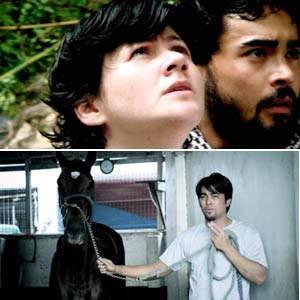 Some of the entries that will compete in the Cinemalaya-Netpac Award are Aurora (top frame) and Karera (bottom frame). Aurora stars Rosanna Roces and Sid Lucero while Karera is topbilled by Jay Manalo. Both films are directed by Adolfo Alix Jr.
Now on its fifth year, the Cinemalaya Philippine Independent Film Festival marks another milestone in its rich history.

Slated for July 17-26, 2009 at the Cultural Center of the Philippines, Cinemalaya Cinco will be featuring 10 full-length features and 10 short features in its annual competition. It will also be showing a number of fresh works that promise to boost the festival's growing audience.

This year, it opens its door for independent films to be screened for the first time in the Philippines, as they vie for this year's NETPAC (Network of Promotion for Asian Cinema) prize award, another first from Cinemalaya.

"Since our first year, NETPAC has been trying to be a part of Cinemalaya," said Direk Laurice in a previous interview with PEP (Philippine Entertainment Portal). (Click HERE to read related article)

A juror of international and local personalities will decide on the winner of the first Cinemalaya NETPAC Prize. NETPAC is a global organization with 29 member-countries and is composed of critics, filmmakers, festival organizers, curators, distributors, exhibitors and film educators. It has film festival partners in Singapore, Pusan, Jeonju, Kerala, Kazakhstan and Osian's Cinefan in Asia; Berlin, Locarno, Karlovy Vary, Rotterdam, Vessoul in Europe; Brisbane in Australia; Hawaii in the US; Antalya in Turkey; and Black Nights in Estonia.

The films in the NETPAC selection with their screening date and time: