Astig will have its world premiere at the CCP, July 18 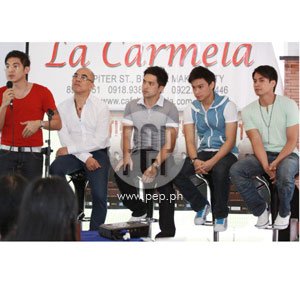 Direk GB Sampedro (standing, wearing red) revealed that he studied in Manila for ten years, which is why he is very familiar with the landmarks of the said city. Boy Abunda co-produced the Cinemalaya entry Astig, which stars (from left) Dennis Trillo, Edgar Allan Guzman and Arnold Reyes.

The full-length feature Astig is one of the ten full-length films competing in the main section of the 2009 Cinemalaya Philippine Independent Film Festival. It has the chance to win a Cinemalaya Balanghai trophy and an additional grant of P200,000.

During the July 9 press conference of Astig, the main cast members of the film were introduced to the media at the La Carmela Café in Makati City. Astig is an episodic tale of four young men trying to survive the squalor, filth and perversity of Manila. The movie is topbilled by Dennis Trillo, Sid Lucero, Edgar Allan Guzman, and Arnold Reyes.


It tells the story of Ariel of CM Recto (Dennis), a conman who leaves his girlfriend (Glaiza de Castro) upon learning that he is in love with her; Boy of Oroquieta Street (Edgar Allan), an expectant young father who has to sell his body to pay his wife's hospital bill; Ronald of Escolta (Arnold), a Chinese mestizo who is coming to grips with his identity; and Baste of Arranque (Sid), an overly-protective son who wants to avenge his sister.


In the first episode, viewers will be able to meet Ariel, a conman who operates in Recto Avenue. It was revealed that Dennis will open the film with his love scene with Glaiza de Castro. How was it like shooting the intimate scene with his fellow GMA-7 star?


Dennis's character sells fake documents and high school papers in the morning. At night, he brings different girls to motels so he can extort more money from them.

Dennis received a lot of praise from Astig co-producer Boy Abunda. Is he hoping to get any acting award for this movie?

But aside from bagging the awards, Dennis hopes to present a film that his fans will like, especially since this is a very daring role for him.


FROM TV TO THE BIG SCREEN. Direk GB has established himself as a director of morning talk shows such as Homeboy, Boy and Kris, and Ruffa and Ai.

Since the film will feature four different love scenes (one of which is man-to-man as portrayed by Arnold Reyes and Gardo Versoza), what MTRCB rating is Direk GB hoping for?

The new film director said that he is not after the MTRCB rating, but he would rather focus on the actual content of the movie.

TRUE-BLUE MANILENO. Since Astig aims to uncover the seedy side of the "Ever Loyal and Distinguished City," Direk GB revealed that he had an advantage because he was very familiar with the streets of Manila. This is because GB graduated with a degree in BS Accountancy at San Juan de Letran.


Click HERE to get a chance to win tickets to selected screenings of Cinemalaya 2009.


Here is the schedule of Astig at the Cultural Center of the Philippines: