Cinemalaya Cinco carries on with its grand tradition 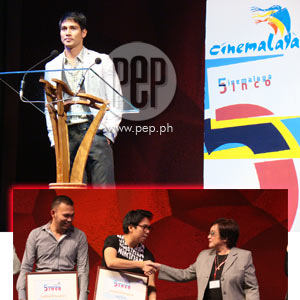 For the past five years, July has been a time of harvest for the independent filmmaking scene. Hundreds of entries from all over the Philippines are submitted to the screening committee for the chance to compete in the Cinemalaya Philippine Independent Film Festival that is highly anticipated by film enthusiasts and members of the academe.


With Cinemalaya as their springboard, Filipino filmmakers have proven that they are a force to be reckoned with. Our homegrown directors have shown that with Pinoy creativity and ingenuity, they can come up with original stories that will attract viewers and have aesthetic appeal as well.


GRAND OPENING. The opening-night ceremonies of Cinemalaya Cinco last Friday, July 17, at the Cultural Center of the Philippines had a very festive atmosphere. Students, guests and members of the film industry trooped to Pasay City despite the heavy rains that day.

The Philippine Ballet Theater, Airdance and the College of St. Benilde Romancon Dance Company were tapped to showcase production numbers that night. Real-time videos of their performances were projected on the walls of CCP for the benefit of those watching at the second and third floors of the venue.

Even the directors of the competition films—10 full-length and 10 short films—arrived in style: they emerged from a vintage car before being introduced to the viewing public.


STARS OF MANILA GRACE PREMIERE. The 1,800-seater Main Theater (Tanghalang Nicanor Abelardo) was filled to capacity that night. Co-producers Edgar Mangahas and Arleen Cuevas welcomed the audience to the Philippine premiere of Manila.

As the producer-lead star of Manila Piolo Pascual made his speech, he was sometimes interrupted by cheers of his fans.

Direk Adolf Alix Jr. (who helmed the Night episode of Manila) also pointed out why they decided to create this twin-bill film that aims to pay tribute to two great Filipino directors.


Laurice Guillen and Nestor Jardin then awarded framed certificates of recognition to Adolf and Raya for being chosen to open this year's film fest.


Also present that night were Piolo's co-stars in Manila: Jay Manalo and Rosanna Roces. Piolo's leading lady in Lovers in Paris, KC Concepcion, made it a point to attend the premiere night along with ASAP mainstay Erik Santos.


Prior to the screening of the movie, the trailer of Kimmy Dora: Kambal sa Kiyeme was shown, eliciting laughter and cheers from the audience. It showed Eugene Domingo portraying twins who have distinct personalities. In one scene, she was even shown wearing a gray swimsuit. This mainstream film is also co-produced by Piolo Pascual.


GRAND TRADITION. There is no doubt that Cinemalaya has placed the Philippines on the world map. The list of entries that have earned recognition abroad keeps on growing year after year.

But even more importantly, Cinemalaya has placed indie films closer to the hearts of Filipino viewers. The annual film festival is developing a new generation of discriminating viewers who will learn to appreciate films that reflect our unique Filipino heritage.

According to a poll conducted among 215 respondents during last year's Cinemalaya, young Filipinos aged 18-24 comprise a majority of the audience (58.8 percent). Majority of them were students (63 percent) and most of them were already in college (96.3 percent).

By exposing the youth to these independent works, this annual film festival helps enhance their sensibilities and promote critical thinking. The hallways and staircases of CCP come alive with the excited chatter of viewers. They exchange ideas about the films they watched, what scenes they liked, what flaws they noticed.

Soon, these students will give rise to the new breed of filmmakers who will carry on with the tradition of Cinemalaya.

And that is what makes it all so grand!
Read Next
Read More Stories About
Piolo Pascual, Adolf Alix, indie
Post a Comment
Featured
Latest Stories
Trending in Summit Media Network