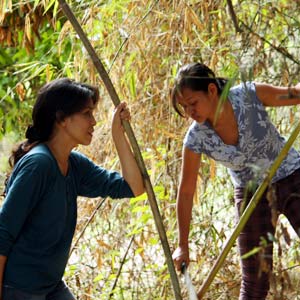 The characters of Irma Adlawan (left) and Mercedes Cabral (right) harvest rattan in one of the scenes of Ang Panggagahasa Kay Fe.

Ang Panggagahasa Kay Fe is one of the ten full-length films competing in the 2009 Cinemalaya Philippine Independent Film Festival. The awarding ceremony will take place at the Cultural Center of the Philippines on July 26, 2009.


When an OFW (Irma Adlawan in the titular role) goes back home, her husband (Nonie Buencamino as Dante) appears hostile of her return. Dante often picks fights over the littlest things and Fe always finds herself on the losing end. To make matters worse, he resorts to physical violence leaving Fe bruised and wounded each time. Before Ang Panggagahasa Kay Fe turns into a full-blown drama about a battered wife, the real plot unfurls itself in a mystifying yet subtle fashion.

A basket filled with black fruits mysteriously appears on Fe's doorsteps every day. When her husband accuses her of having a lover, she asks a former suitor (TJ Trinidad as Arturo) to stop sending her gifts. But apparently, Arturo has nothing to do with the basket of fruits. As Fe grows more agitated and as Dante becomes more abusive of her, she finds herself in a three-way crossroad: will she stay with her brutal husband, elope with Arturo, or entertain her secret admirer who may just be a product of her imagination?

The film's strongest tool in its arsenal is the screenplay. The well-researched story is rich in cultural authenticity and social relevance. With the writing dexterity of Alvin Yapan (director, writer, and co-producer), the character of Fe transcends the digital medium and becomes a real person: she is strong but frail, determined but afraid. The nuances of her character are made apparent with the impeccable script. Aside from Fe, the development of the roles of Dante, Arturo, and even Arturo's ill father are supported by underlying stories and consistent characterization.

As a director, Yapan mans the camera with an artistic vision manifested in every frame and every angle. His shots linger, but not to the point of static cinematography. His close-ups suggest subdued intimacy to his subjects whether living or inanimate. His camera glides through the scenes revealing just enough without giving away too much. The use of repeated scenes and overlapping sequences coupled with the trance-like quality of the shots are effective in confusing viewers as to which scenes are imagined and which are real. Thus staying true to the film's motive of challenging our judgment on whether Fe's mysterious suitor is just a figment of her imagination or not.

Alvin Yapan's debut is a tale that tackles domestic abuse and romanticizes Pinoy folklore. It is an odd combination, but gripping nevertheless. If Ang Panggagahasa Kay Fe is any indication of the quality of films in this year's serving of indie gems at Cinemalaya, then things are looking up for the "big, small film festival."


Regular tickets are priced at P100 while students can buy tickets for
only P50. A day pass costs P300 (good for 5 screenings per day) while a
festival pass costs P1000 (can be used for all screenings).

Here is the schedule of screenings of Ang Panggagahasa Kay Fe: