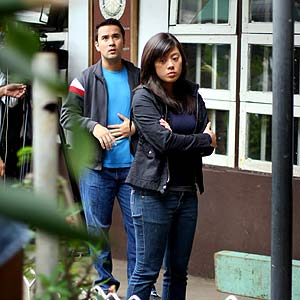 Through his latest film Dinig Sana Kita (international title: If I Knew What You Said), director Mike Sandejas shows us that you don't need ears to hear and that "even in silence, there is music."

Direk Mike is best known for helming the quasi-biographical movie about The Dawn, Tulad ng Dati, the recipient of the Balanghai trophy during the 2006 Cinemalaya Philippine Independent Film Festival.


THE PLOT. Dinig Sana Kita is the story of two people living in opposite worlds. Niña (played by Mike's daughter, Zoe Sandejas) is a band vocalist. When she's on the microphone, she wears her heart on her sleeve with her emotive rock ballads but outside the stage, she is vulnerable. Although she appears tough on the outside, this often-misunderstood troublemaker is fragile when it comes to family matters. So when anxiety attacks, she resorts to her own version of therapy: alcohol and ear-splitting music from her headphones.

Meanwhile, Kiko (Romalito Mallari, a real-life Deaf student) is a dancer. His disability does not stop him from leading a normal life. He learned how to dance and appreciate music by feeling the vibrations and counting his steps. But Mr. Optimistic's life is not without his fair share of miseries. In the deafening silence of his world, he struggles to come to terms with the fact that he was orphaned since birth.

What will happen when their worlds collide? What happens when the dancer meets the singer, the calm meets the storm, the parentless meets the overprotected? You guessed it: the two make beautiful music together.


THE VERDICT. Dinig Sana Kita can easily turn into yet another cheesy love story. Luckily for us, this is not a mainstream film wherein the lead characters can hate each other one minute and start making love the next. The script introduces us to the characters first, takes its time to immerse us into their lives, and gradually builds the romance. But instead of philosophizing about love like a dreamy high school girl, the film focuses its attention on dealing with the characters' personal issues: the fear that greatly consumes Niña and the void that is longing to be filled in Kiko's world. Before you think that this is a heavy drama that will squeeze your eyes dry, I'm happy to inform you that Direk Mike has a humor so be prepared to wet your hankies and giggle at the same time.

Once again, this film has disproved the notion of major film studios that big moments filled with endless tears and hysterical acting are needed to engage viewers emotionally. Sometimes, the most heart-tugging scenes are those that are delivered in silence.

I was mostly affected by the confrontation between Kiko and Dr. Rafael Mendoza (Robert Seña). There were no screaming, no punches, not even a single word was said. I never thought an argument through sign language could convey so much emotion.

Dinig Sana Kita is a family drama, an advocacy, and an inspirational tale. It empowers the handicapped as well as normal people whose disability is the unwillingness to help themselves. It reminds us that the only things that are impossible are those that we refuse to do.

Continue reading below ↓
Among the 10 films in competition this 2009, Dinig Sana Kita is most likely to win the Audience Choice Award since the film appeals greatly to the predominantly young crowd of Cinemalaya. In fact, during the opening night of Cinemalaya last July 17, the audience applauded loudly when the trailer of DSK was shown just before Direk Mike emerged onstage.

I'm sure Dinig Sana Kita would make a killing both critically and commercially once it crosses over the mainstream.


Here is the schedule of Dinig Sana Kita at the Cultural Center of the Philippines: