The Proposal will open on July 29 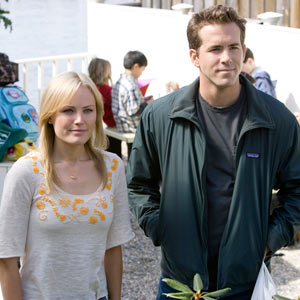 Malin Akerman (left) figures in a love triangle with Sandra Bullock and Ryan Reynolds (right) in The Proposal. This romantic comedy will open in Philippine cinemas starting July 29, 2009.

Akerman plays Gertrude, the effervescent young woman Andrew (Reynolds) left behind in Alaska when he went to New York to work for high-powered book editor, Margaret (Bullock). Gertrude just may be a serious romantic threat to Margaret when the latter accompanies her pseudo-fiancé Andrew back to Alaska to meet his parents.

"Gertrude has come to realize that Andrew was the best thing that ever happened to her," says Akerman. "It's one of those things-you let someone go and then you realize it was a mistake. Now it's hard watching him with this new woman.

"I've played a lot of crazy, wacky characters in the past," continues Akerman, "so it's nice just to be a sweet, lovely kind of girl."

In 2007, Akerman starred with Ben Stiller in the romantic comedy The Heartbreak Kid, directed by the Farrelly brothers. Her other film credits include the independent releases Harold and Kumar Go to White Castle and The Brothers Solomon.

Born in Stockholm, Sweden, Akerman moved to Toronto with her family at the age of 2 and spent her youth in both Canada and Sweden. At age 5, she began modeling and acting in television commercials. When she was 17, she won the "Ford Supermodel of Canada" search and began spending her summers modeling in Europe. While enjoying success as a model, Akerman ultimately decided to attend college and to focus on her acting.

Soon after, she moved to Los Angeles and began landing roles in independent films, as well as guest roles on television series. Her breakthrough came in 2005 on the HBO series "The Comeback," starring Lisa Kudrow. Akerman gained attention of both critics and audiences for her work in the series regular role of Juno Millken on the show. In addition, she had a memorable recurring role on the third season of the hit HBO series Entourage.

Opening across the Philippines on July 29, The Proposal is distributed by Walt Disney Studios Motion Pictures International.