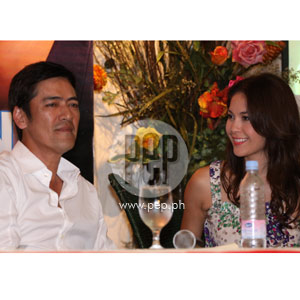 The decision to pair Thai-British Paula Taylor with Vic Sotto has completely nothing to do with the latter's alleged preference to work with foreign beauties.

"The story requires a foreigner and Paula perfectly fits the role," Vic candidly told the entertainment press last July 21 at the Moomba Bar and Café in Quezon City.

LOL is a modern comedy featuring the story of Samson (Vic) and Lily (Paula)—two individuals with different cultural backgrounds who managed to forge a connection through the Internet. What follows is one wacky ride spiced with magic, adventure, fantasy and love for the two bi-racial characters.

CYBER LOVE. Director Tony Reyes explained that Vic originally had a concept revolving around the popular cyberspace communication practice called "online chat." The idea of presenting two individuals with different cultural backgrounds and eventually falling in love with each other intrigued Vic no end.

With the concept firmly plotted, Vic and his team proceeded to look for a suitable leading lady. Looking for a local actress was totally out of the equation, which eventually led them to stumble upon Paula, who at the time was already an established television and print ad model with acting experience to boot.

Adjusting to the Philippines was not entirely hard for Paula as she already appeared in countless local ads like Kenny Rogers Roasters, Plains and Prints, and Myra-E to name a few.

Vic said: "Paula's not really new to the Filipinos and the Philippines. Sabi ko nga kanina she already appeared in commercials, print ads, billboards and madalas siya dito, e, so the Philippines isn't entirely new to her. So she never had a hard time adjusting on how we work here, how Filipinos are and as far as acting naman it's nothing new to her she's a very popular actress back in Thailand."

The chemistry between Vic and Paula was very evident on screen, which in a way delivers the film's main message of love having no barriers regardless of geography and social background.