Astig and Bayaw will have additional screenings at the CCP 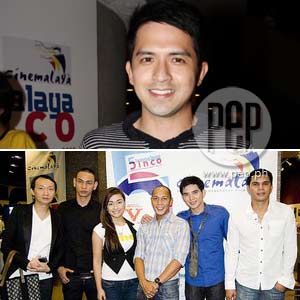 Astig, the Cinemalaya entry starring Dennis Trillo (top frame) will have two more screenings at the Cultural Center of the Philippines. Bayaw will also have an additional screening. Those who attended the gala night of Bayaw were (bottom frame, from left) producer Danio Caw and the stars of the film Janvier Daily, Kaye Alipio, Monti Parungao, Andrew Miguel, and Paulo Rivero.

To guide moviegoers at Cinemalaya Cinco, organizers have set up huge panels at the Cultural Center of the Philippines indicating the time and venues of the movies to be shown per day.

Some screenings have already been sold out, much to the dismay of film enthusiasts and students alike. This has prompted organizers to schedule more screenings of popular films to accommodate the overwhelming demand.


ASTIG HAS 2 MORE SCREENINGS. Astig, the Cinemalaya 2009 entry starring Dennis Trillo, Sid Lucero, Arnold Reyes and Edgar Allan Guzman is enjoying both box-office and critical success at the Cinemalaya Philippine Independent Film Festival at the Cultural Center of the Philippines.

The movie, produced by Boy Abunda and Boy So and directed by GB Sampedro, has been given additional screening time at the CCP to enable more people to watch this well made and well acted movie.

On Saturday, July 25, Astig will be shown in two venues: 10:00 am at the Tanghalang Aurelio Tolentino and at 3:30 pm at the Tanghalang Huseng Batute. These will be the final time that Cinemalaya viewers may be able to catch the Astig at the CCP before the awards ceremonies this Sunday, July 26.

"I am deeply honored and touched for the warm reception that people have given our movie. Our dedication and hard work have indeed paid off. We are looking forward to making more people watch this great film," says supervising producer Noel Ferrer.

The stars, along with the production staff will be there to grace the occasion.

BAYAW SCREENS AGAIN ON SUNDAY. Due to the phenomenal box office success of Bayaw during its premiere at the CCP last July 21, Cinemalaya has decided to show the movie once again to cater to the overwhelming public demand. Bayaw will have its second run at CCP's Tanghalang Huseng Batute Theater on July 26, Sunday at 3:30pm.


Bayaw is reportedly the top grosser among the nine films for the NETPAC sidebar competition category. The Network for the Promotion of Asian Cinema Award is given at select international film festivals to promote Asian cinema by spotlighting exceptional films and discovering new talents. This is a separate category and competition from the films that were granted funding by the Cinemalaya organization. The winner for this category will be determined by an international jury.

Monti Parungao, the man who directed Bayaw, is also the same person behind the film Sagwan. He describes Bayaw as a movie that combines action, mystery suspense with the gay genre. The film top bills new indie movie king and GAWAD Urian nominee, Paolo Rivero together with comebacking actor, Janvier Daily.

Bayaw takes a look into the unique and complex relationship of two brother-in-laws that borders between family ties, brotherhood, camaraderie and love.


Tickets to Astig and Bayaw are available at the CCP and through Ticketworld.