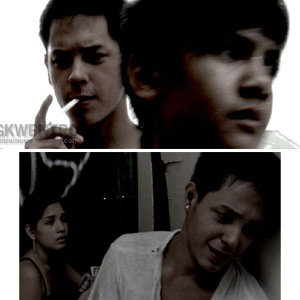 At only 21 years old, Pepe Diokno (a newspaper columnist and auteur in the making) is the youngest person to be given a Cinemalaya grant. The grandson of the late Senator Jose "Pepe" Diokno focuses on the alarming number of political killings taking place in the Philippines.

Direk Pepe helmed Engkwentro, the love-it-or-hate-it film of Cinemalaya Cinco. This will provoke discussions and even spark debates because of its dissection of juvenile crime and moral ambiguity. The unconventional filmmaking technique: the use of the shaky handycam a la The Blair Witch Project will polarize viewers into haters and believers.


THE PLOT. Engkwentro is the story of two teenage brothers, Richard (Felix Roco) and Raymond (Daniel Medrana), caught in the ruckus of two warring gangs. Richard is the leader of the Bagong Buwan gang. The Davao Death Squad, a band of vigilantes allegedly backed by the local government to murder suspected gangsters and criminals, is going after him. So he decides to leave town and elope with his prostitute girlfriend, Jenny-Jane (Eda Nolan).

As he tries to source funds for his escape, Raymond is being inducted to the rival gang Batang Dilim. As the night comes to a close, a square off (engkwetro) becomes deadly when Tomas, the gang leader of Batang Dilim (portrayed by Zyrus Desamparado) orders Raymond to kill his older brother.

This indie film also stars Celso Ad. Castillo as Mayor Danilo Suarez; Bayang Barrios as a prostitute and the mother of Eda Nolan's character and Ronnie Lazaro as a murderous policeman.

The inexorable conclusion, punctuated by searing brutality, will shock you. You won't believe that what you just saw are events lifted from actual news headlines. It will leave you with a dreadful feeling that is difficult to shake off.


THE VERDICT. Since Engkwentro deals with an alarming real-life subject, Direk Pepe made it a point that use a filmmaking style would embody its raw and gritty nature. The camera walks us through the labyrinth of dingy alleys and shanty houses overpopulated by slum dwellers, in a style somewhat similar to Jeffrey Jeturian's Kubrador. We pose as voyeurs as the camera individually follows the exploits of the characters in what seems like a single, continuous take. In fact, Direk Pepe did shoot it much like a stage play (practically without cuts) since he wanted viewers to have a "real-time" experience while watching this action-social commentary film.

Some of the day scenes bathe in solar glare, while some of the night scenes are intentionally too dark. It helps that Direk Pepe used high-definition cameras but the cinematography can still be dizzying especially during fight sequences and parkour chase scenes. This callusing tale of moral corruption is not for everyone. Some will walk out of the theatre even before it is finished because of nausea. Others will complain that it is too stylized, while some will applaud this body of work as a bold and unforgettable piece of cinema.

Among the ten finalists vying for the Balanghai trophy in the 2009 Cinemalaya Philippine Independent Film Festival, Engkwentro has the highest chance of being picked up by international film festivals. It may even snatch the top plum from festival frontrunners Mangatyanan and Ang Panggagahasa Kay Fe like a real dark horse. Watch it if you dare.