Uncut version of Boy will be screened at the CCP, July 24 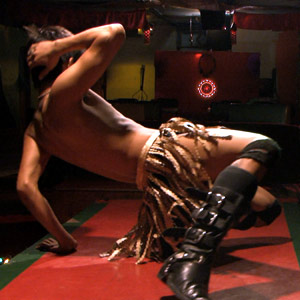 A poet sells his collection of comic books and action figures so he can afford to hire a male stripper (played by Aries Pena, back to camera). The Philippine premiere of Boy will take place this Friday, July 24, at the Cultural Center of the Philippines.

This time, he explores the world of macho dancers through his latest work titled Boy. In this film, a poet sells his collection of comic books and action figures so he can afford to hire a male stripper on New Year's Eve.

The film became controversial because it was not allowed to be screened publicly at the 22nd Singapore International Film Festival (SIFF) for "normalizing homosexuality."

The SIFF organizers suggested that Direk Auraeus show his film to the jury and a limited audience but the Filipino director declined. "I make a film not for a jury but for an audience," he says.

By doing so, he forfeited his chance to compete for the Silver Screen Award of the SIFF.

In 2005, Direk Auraeus also had to deal with Philippine censors when the Movie and Television Review and Classification Board drastically cut his film Tuli, starring Desiree del Valle and Carlo Aquino.

All of these are just part and parcel of being a director. Auraeus stresses: "The demon of censorship is one of the things that we filmmakers must face."

Boy will have its Philippine premiere at Cinemalaya Cinco this Friday, July 24, (6:15 PM) at the CCP Little Theatre. It is one of nine films competing for the NETPAC (Network for the Promotion of Asian Cinema) Jury Award.

Direk Auraeus has won the NETPAC prize twice before: Ang Pagdadalaga ni Maximo Oliveros bagged the prestigious award in Rotterdam Film Festival, the Netherlands while Tuli earned for him another NETPAC during the 2007 Berlinale (Berlin International Film Festiva) in Germany.

PEP (Philippine Entertainment Portal) was able to interview Direk Auraeus through email regarding his latest work. Here are some excerpts from the interview:

Where did you get the idea for Boy?


Why did you decide to create another coming-of-age film?

If you look at it all, my first four fiction features are coming of age films (Maximo, Tuli, Pisay and now Boy). Kasabay ko ang mga pelikula ko sa pag mature. I want to grow with my films.

How did you cast the characters of this film?

I had auditions in macho dancer bars and in UP (University of the Philippines). Adam "Aeious" Asin is the unnamed poet. Aries Pena is the lead macho dancer. Madeleine Nicolas plays the mother of the poet and Nonie Buencamino plays the father of Aries.

Are you afraid of being edited out again by the MTRCB?

I have decided to show the film to the Filipino public. It will have its run at the IndieSine (Robinsons Galleria) by mid August. I have also decided that I want to face the MTRCB and see what they will decide. I want to directly know what kind of people are running the MTRCB. From there...we will see.

Jeremy Segay from Cannes thinks that we are still the most progressive in terms of censorship in the Asian region. I hope he is right. It is really sad that the same laws that were from the Martial Law times are still here.

A reviewer from Jeonju International Film Festival said that Boy is replete with social messages. What are these social messages that you wish to convey?

After the People Power revolution of 1986, I thought things will change. I was a young idealistic boy, I guess. But now more than two decades later, nothing has changed: the poor are still getting poorer and the rich are obscenely getting richer. I never thought that I will be making the slum films that they made in the early ‘80s, much less a macho dancer movie.

But as I see my neighbors outside, the slums are still there: matatanda na ang mga tambay sa kanto--pero tambay pa din. This film touches on that: on social class and on the disillusionment of a revolution that could have improved our way of life in the Philippines.

Which was more difficult for you: Tuli being cut by the MTRCB or Boy being disallowed in Singapore?

Tuli was cut (mind the pun) without my permission. That was painful. Second time around, my bout with censorship was much easier, since I have been there before. And the SIFF (Singapore International Film Festival) was very respectful of filmmakers since they have a no-cut policy.

They were also surprised that the Singapore censors disallowed the film, for they found it very progressive. That is why they were proposing to have the film still in-competition and just show the film to the jury (which I didn't agree with and they respectfully accepted this decision).


SYNOPSIS. One evening, young budding poet (Adam) observes lip-synching drag-queens and dancing rent-boys (macho dancers) in a gay bar. The poet finds himself attracted to Aries, who comes from a poorer part of town. Selling his comic books so as to be able to afford the macho dancer for one night, Adam's character buys Aries at the bar and brings him home for the New Year.

Sparks fly while celebratory fireworks go off outside the house and the boys forge a fragile connection that neither of them is certain will last. Boy is a coming-of-age tale of a sensitive boy who arrives at his first lesson about love and who learns to grow confidently into his own sexuality.