OMG cast will have red-carpet premiere at Trinoma, July 27 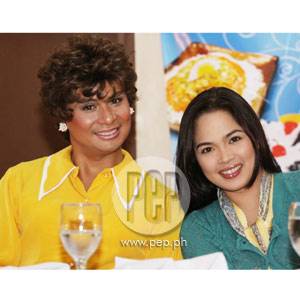 The cast of OMG (Oh My Girl) will conduct a meet-and-greet session with fans this Sunday, July 26, at Market! Market! The red-carpet premiere will take place at Trinoma on July 27, 2009.


The cast of OMG (Oh My Girl) will conduct a meet-and-greet session with fans this Sunday, July 26, at Market! Market! in The Fort. The red-carpet premiere will take place at Trinoma this Monday, July 27, 2009.

In the press conference of OMG held last July 16, the lead cast members shared their thoughts about making this romantic comedy film.

Continue reading below ↓
Director Dante Nico Garcia is best known for helming the drama Ploning, which was chosen as the Philippine entry to the Best Foreign Language Film category of the 2009 Academy Awards. When asked what viewers should expect from his latest movie, he quipped, "Feeling ko, ito na finally yung papasok sa Oscars!"


On a serious note, he explained: "Ako po, I can honestly say I'm equally as proud sa OMG as Ploning. I know 30 years from now mapapanood ko ‘to sa mga apo ng kapatid ko, mga anak ni Juday, at hindi ako mahihiya na ginawa namin tong pelikulang to. It doesn't matter kung ano yung genre, and I think we were able to do it."


SYNOPSIS. OMG! (Oh My Girl!) is a story of two childhood best friends who are separated by fate, only to be reunited years later.

Opao lived with Biboy in an orphanage located in Taal, Batangas. Promising to stay together forever, Biboy even makes a song that would be their way of finding each other if ever they got separated.


Madam Annie (played by Carmi Martin) adopted Opao and transformed her into the one and only Ultraelectromegalactic Seasonal Superstar. Darling (Judy Ann Santos) became famous but her life is filled with sadness so she spends a lot of time with her friends.

Biboy (Ogie Alcasid) grows up to be a cellphone repairman who suddenly realizes that Opao and Darling are the same person. Through a twist of fate, Biboy finds himself entering Darling's world as her new assistant named Frida Akikla. The only way for him to be reunite with the girl of his dreams...is to become a girl himself.

Jon Avila is cast as Bambam, Darling's love team partner in a movie.