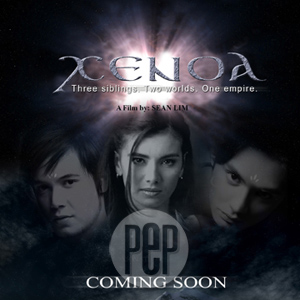 Isabel Granada, Paolo Ballesteros (left) and newcomer Rafael Nanquil are the three heirs to the throne of Xenoa. This sci-fi offering from independent director Sean Lim is packed with cutting-edge special effects, making Xenoa an action-filled visual feast that promises to bust boundaries in the field of independent filmmaking in the Philippines.

He also praised Isabel's husband, Geryk Genasky, for having a similar work attitude. "Kay Geryk, hindi mo ma-feel yung politics in him." Geryk, a.k.a. Jericho Aguas, is a councilor in Angeles, Pampanga, and is now running for vice mayor in the said province. Geryk is the grandson of former popular singer Rudy Genasky. He used to be a commercial model before he became an actor and singer. While he was in showbiz, he put up his own business ventures in Angeles City where his maternal grandfather Tom Aguas also served in the past.

An endorser of the YSA Skin Care, Isabel is producing an album with Chuckie Dreyfus who started as a child star and grew up to become Isabel's love teammate. She now takes care of her son with Geryk.

Sean admits to having a longtime crush on the comebacking actress. "Crush ko siya ever since bata ako," says the 22-year old director. According to Sean, he specifically cast Isabel for the role because of her almond-shaped eyes, making her perfect for the role of a hybrid human named Eli. Her character is described as a naïve yet undeniably gorgeous woman. She is trusting and generous to a fault. Eli grows up in an orphanage house managed by nuns.

Xenoa tells the story of Queen La'ian, ruler of the triple-star Xenoan system, who seeks refuge on Earth where she gives birth to the heirs of the Xenoan throne—Zeus played by Paolo Ballesteros, Drix by Rafael Nanquil, and Eli by Isabel. Geryk plays Dennis, her loyal guard who, unknown to Eli, was sent by Queen La'ian to protect her.

The film is now in the post-production phase and is expected to come out this September.