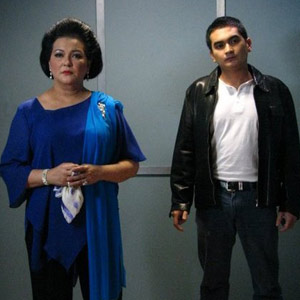 Pinky Marquez (left) and Lex Marcos portray Imelda Marcos and Robin Padilla in the short film Wat Floor Ma'am. This short film will be screened at the UP Film Institute on July 30, Thursday, at 3 p.m.

Spectators who did not get to see most of the films are just relying on reviews. That's why it's welcome news to learn that the University of the Philippines Film Institute will be holding screenings of the competing entries. See the 10 full-length films and 10 short films from July 28 to August 4 at UP Diliman, Quezon City.


This is especially good for short films in the competition, which may have a more difficult time getting screened outside of the festival. A total of 26 entries were submitted to the short feature category of Cinemalaya 2009 but only then were selected for competition. Here is a chance to see them again.

Click HERE to view the schedule of the full-length films to be screened at UP Diliman.

They say that one man's medicine is another man's poison. An old man who has a habit of quoting poetic passages has gained a reputation for being a faith healer in the slun tenements. Tatang (Nanding Josef) can heal physical injuries but cannot bring the dead back to life, an ability that causes his neighbors to admire but shun him at the same time. He shares this outcast situation with the gay parlorista (Carlon Matobato) who is the butt of jokes among the men but a source of comfort among the women of the depressed neighborhood. Tatang and the gay beautician also share the same dream: that of a beautiful godess-like creature who hounds them in their dream when they are in deep thought of their aspirations.

Musa is strong in technical aspects. The scenes are clean and the transitions are smooth. However, without a solid story core, this goes to waste since the audience is left confused rather than enlightened. My guess is that Musa is a take on man's subjective view of things around him depending on how it favors him in the end.

Moving in flashbacks, Behind Closed Doors is a passionate dark comedy about a stagnant relationship that survives because of the small lies and narrow escape paths that both parties slip into to preserve the status quo of the union.

Behind Closed Doors is commendable for its great storyline and its overall cohesion. Despite the numerous flahsbacks, the scenes fall back into place without missed details.

In the Cinemalaya Cinco program, Tatang did not look promising. The story, after all, is about an old man who makes ends meet by stealing with his grand daughter as his apprentice, a plot already abused in television melodramas. But as it progresses, the curious relationship between Tatang Ruding and the young Ester unfolds.

Refusing to accept their dependence on each other, Tatang Ruding verbally demoralizes Ester, calling her stupid. In turn, Ester spats back at him but exhausts her skills at theft to bring home food--all to prove to the grumpy old man that she is not stupid as he tells her she is.

Tatang is a fresh take on the modern parent-child relationship. It depicts how parents, for fear of not being needed, assert superiority at all cost and impose guilt on their children. Children, in turn, struggle to maintain independence even as they are haunted by a life-long parental responsibility that their either resent or accept.

The film puts a positive spin on this gritty social reality by creating an unfortunate incident as a catalyst to reconcile the differences between Ester and Tatang Ruding and to show their acceptance of their symbiotic relationship. But this also caused the film to fall into the melodramatic trap in the end when Ester and Tatang Ruding hug ala Maalaala Mo Kaya. Nonetheless, it is one of the better crafted and better thought of films in the shorts roster.

In the souvenir program, the film evoked curiosity among viewers. After all, it involves a "flamboyant former First Lady of the Philippines," undeniably an allusion to Madame Imelda Marcos herself, and a "Bad Boy actor from local cinema," another undeniable allusion to Robin Padilla, "trapped inside an elevator of an old government building." Of all the shorts in the competition, I was looking forward to this one the most, imagining the shocking revelations and controlled drama in tight quarters.

However, Wat Floor Ma'am started to fall apart from the start. The combination of characters itself was not justified. Why on earth did the imaginary Madame Imeldific got trapped in a government elevator with a mock-up Binoy was not explained. And who does Binoy represent anyway to ask Madame upfront: Did you really steal the wealth of the Filipino people?

I had high hopes for this film. Being claustrophobic, I imagined the pressure of being asked a painful and direct question in a cramped elevator in a decaying building. All the reason for me to believe that the film is an ambitious attempt at capturing a slice of Imelda Marcos' personality but only succeeded in recreating in what is already there instead of creating a new interpretation of Imelda.

Wat Flor Ma'am is entertaining enough because of its obviously comic elements like a Chinese man suddenly appearing from nowhere or the elevator suddenly being converted into a theater but that's all there is to it.

In an old townhouse, a young girl grows up under the watchful eye of her austere mother. One of her mother's strict orders is to never to enter a forbidden room in the house. Overpowered by a child's curiosity, Angeli opens the room and discovers her mother's terrible secret.

Hulagpos has a gripping dark ambiance that is consistent throughout the film. Through flashbacks, the mother's awful past is rendered like a gothic tale of a desperate and forbidden love nipped too late. Inside the forbidden room, life-sized statues of Catholic saints tell Angeli the awful past with their furrowed brows and dark eyes.

Ugat sa Lupa is like an Amorsolo painting that came to life: sunny open fields, clear-faced brown people, and colorful fabrics. It is a refreshing break from the gloomy settings of the other films in competition.

The non-dialog film dramatizes the hardships of a young a farming family living in an island bereft of fresh water. To survive, they have to travel to another island to fetch fresh water. Enjoying a simple and peaceful life but deprived of a very basic need, the family's life is a mirror of man's basic existence on earth-a life of hard work.

Being a non-dialogue film that is not plot-driven, it automatically becomes am acting piece. At this point, we were not disappointed by Gerald Madrin and Angeli Urquico who plays the male and female leads. With the use of ambient sounds and simple music, we are lulled back to a bygone era of traditional family life.

Si Bok at ang Trumpo is a lighthearted take on childhood mischief. A young boy named Bok irks his grandmother by making holes on her floor with his old-fashioned toy top (trumpo). The old lady then vents it out on Bok's mild-mannered mother for marrying a poor man who cannot afford to buy Bok more expensive toys other than his destructive and antiquated trumpo. On top of it all, the neighborhood kids also tease Bok for having a mere trumpo for a toy. One day, Bok find his toy top broken and he knows his grandmother did it. What follows is how Bok exacted revenge on everybody.

Despite having a very simple premise, the film is a huge crowd pleaser. The audience really loved how witty retorts were sprinkled throughout the movie. Jose Enrique Perez, who plays Bok, is disarmingly cute you can easily forgive him for doing mischief. After laughing, the reality of childhood is there: children forgive but they do not forget.

Latus is an advocacy film fighting against corporal punishment at home. Based on the real-life stories of two teenagers living in a slum area in Davao, Latus tells the story of Vicknelyn and Jenelza, both 16 and physically abused by their fathers. Immune to pain and frustrated with her situation at home, Vickenelyn joins young gang riots while Jenelza chooses the less detructive path and focuses on school. One day, Jenelza witnesses Vicknelyn having a crazy breakdown in front of her abusive father and eventually became crazy herself.

Latus enters a world where women have long accepted that as long as a man puts rice on the table, it is alright for him to beat them.

A young boy alienated by neighborhood kids finds a filthy, yellow ball-that turns out to be a magical ball!-down by the creek. An film with no clear premise, Blogog is enjoyable because of two things: it is open to many interpretations and has many funny moments.

After finding the magical ball, the boy finds contentment in solitude and even discovers a skill in basketball, symbolic of finding himself.

Bonsai is a touching and uncomplicated story of a man who does the unthinkable to win the heart of his lady love.

Romy (Richard Somes) is a plump and funny security guard whose aspirations in life are as simple and manageable as the bonsai plants he care of in his spare time. The only extreme of his emotions is his unexpressed love for Daisy (Angel Aquino), the laundrywoman in one of the houses in the neighborhood. To win her love, Romy does everything to lose weight. One day, he finds Daisy hanging out clothes to dry while sharing a pleasant laugh with an obviously more good-looking and more physically trim stranger.

Bonsai is charming in the clean and linear presentation of the story. Like Romy, its goal is simple: to depict a person's insecurity and the extent of transformation one is willing to go through for love. It is also a reflection of the pain experienced by a shallow dreamer whose simple dreams fail him.