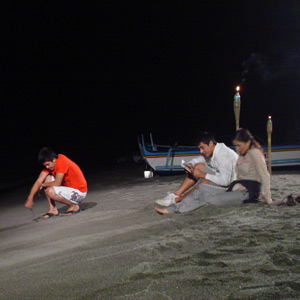 The characters of (from left) Jason Abalos, Akihiro Sato, and Chin-Chin Gutierrez relax on a beach in Dumaguete, Negros Oriental. The indie film Handumanan, which means "remembrance" in Visayan, will be screened from August 5 to 11, 2009 at IndieSine (Cinema 8) of Robinsons Galleria.

Director Seymour Barros Sanchez's first full-length film, Handumanan, made its world premiere during the fifth Cinemalaya Philippine Independent Film Festival on July 22 at the Tanghalang Aurelio Tolentino of the Cultural Center of the Philippines.


Direk Seymour, along with his wife Eloisa, co-writer Richard Legaspi, and the lead stars introduced the film to the crowd. This is Akihiro's first film and in his accented English, he thanked the crowd for the support.

Chin-Chin, who met with a real romance novelist in preparation for her role, pointed out: "It is—once in a while—good to look back at our life journeys, see where we all started, our humble innocent beginnings to know where we all are going."

Jason wasn't able to attend the gala night since he had a taping for his regular ABS-CBN afternoon teleserye, Kambal sa Uma.

Handumanan was selected as one of the six finalists in the third Produire au Sud Film Workshop during the sixth World Film Festival of Bangkok last year. It competed against other eight films in the Network for the Promotion of Asian Cinema (NETPAC) Award during Cinemalaya Cinco. However, the NETPAC Award went to Baseco Bakal Boys.

Handumanan will be screened from August 5 to 11, 2009 at IndieSine (Cinema 8) of Robinsons Galleria.