Mangatyanan will be screened at UP Diliman on July 31 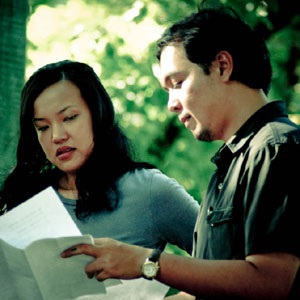 Mangatyanan director Jerrold Tarog instructs lead star Che Ramos during one of the scenes of this Cinemalaya 2009 entry.

Award-winning indie filmmaker Jerrold Tarog is happy with his Cinemalaya experience. He confided this to PEP (Philippine Entertainment Portal) on the eve of the awards night, which took place on July 26, 2009.

Win or lose, being chosen to compete in the 2009 Cinemalaya Philippine Independent Film Fest, with his second full-length indie project, Mangatyanan (The Blood Trail) was already a privilege.

Direk Jerrold was on top of his film's production, from conceptualization to actual shoot, post-prod, and even during the screenings, he had to oversee every aspect of his film, including technical troubleshooting and taking care of his guests invited to the special screenings.

He also made it a point to be present at every screening, "Oo, halos," he said. "Yun lang naman yung stress, actually.

* * * *
BEST PRODUCTION DESIGN. As film, Mangatyanan tackles a very sensitive issue on incest and child abuse, as told against the backdrop of an ethnic harvest ritual (called Mangatyanan). It is conducted by a fictional tribe called the Labwanan. The lead female character, Laya Marquez (Che Ramos) is a travel photographer who is tasked to document the ritual before the tribe discontinues with the practice. Laya is accompanied by her supervisor (portrayed by Neil Ryan Sese).

The dwindling tribesmen, desperately being held together by its leader, Mang Renato (Publio Briones III) becomes a mirror of Laya's own frailties.

Among this year's competing full-length feature films, Mangatyanan proved to be the most "exotic," with a visual design that is simply stunning (credits go to director of photography/cinematographer, Mackie Galvez; and production designer, Benjamin Padero, who won the Cinemalaya 2009 award for Best Production Design).

"With regard to feedback, there have been positive ones, but there have also been on the other side, you know... balanse siya. So, may mga magaganda, may okay lang..." Jerrold noted. "I'd rather that they be open with me than be hypocrites."

As for those who openly praise his latest work, he chuckled before saying, "I've no idea, let's just see. There have been some who openly said they liked the film. Okay. Salamat din."

* * * * *
CAMERA TRILOGY. Jerrold Tarog's latest work is the second installment of what he calls the "Camera Trilogy", starting with Confessional, his directorial debut that won Best Picture/Best Direction prizes at the 2008 Osian Cinefan (New Delhi, India), and the Cinemanila Filmfest and Competition '08 (Southeast Asian Cinema Section), among others.

The famed indie filmmaker was also the recipient of the Best Director plum at the 3rd Cinema One Originals Digital Film Fest in 2007. At that time, Confessional was the runaway winner of the best picture, among many other major and minor awards.

In Confessional, a documentary filmmaker (portrayed by Jerrold himself), who is set to cover the Sinulog festival in Cebu City, accidentally stumbled upon an ex-politician's dark secret. His discovery, eventually, proved to be a matter of life and death.

In Mangatyanan, the director opted to expound on the intricacies of filial ties and dysfunctionality, as mirrored by the realities of a dying culture.

There is a third and last part of this trilogy, which Jerrold said would have for its subject matter an atypical Filipino wedding tradition, beyond all the gloss-over superficialities.

"That one has to wait for funding," he says but he reveals that pre-production has already started.

Why did he choose to feature a dying culture as his subject in Mangatyanan?

"Because it is consistent with the commentary about society," Jerrold answered, "whether or not it's obviously a commentary, or one that's hiding behind a facade. In Mangatyanan, it's somehow hidden..."

After the successful run of Cinemalaya Cinco at the CCP, the public will have another chance to view the competing full-length features and short films. Jerrold Tarog's Mangatyanan will be screened this Friday, July 31, (7 pm) at the Cine Adarna of the UP Film Institute.

Click HERE to view the complete schedule of Cinemalaya entries to be screened at the UP Film Institute in Diliman, Quezon City.