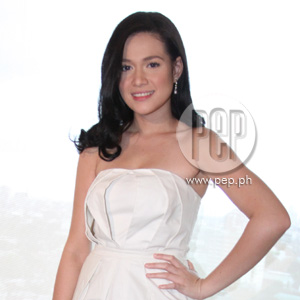 "Hindi naman ako afraid to fall in love. Siguro more careful kasi dala-dala ko na 'yong mga natutunan ko from my past relationships," said Bea Alonzo when asked about falling in love again. This is the main theme of her upcoming movie And I Love You So, which will premiere on August 12. The Star Cinema film will also feature Sam Milby and Derek Ramsay.

Bea Alonzo dared to do an intimate scene for Star Cinema's 16th anniversary movie offering And I Love You So.

She said that her upcoming movie with Sam Milby and Derek Ramsay is very different from her earlier projects, which mostly required her to act like a sweet teenager.

"Aside from mabigat 'yong konsepto namin, it talks about a real woman, a grown up woman. So, compared to my other characters na parang ‘not a girl, not yet a woman,' dito, talagang woman, talagang she has come [of] age," described Bea.

WORKING WITH DIREK LAURENTI DYOGI. And I Love You So is also a comeback movie for director Laurenti Dyogi. His last movie in 2004, Now That I Have You, also featured Bea with her then on-screen partner John Lloyd Cruz.

Bea was excited that she would be directed again by Direk Lauren, whom she considers to be her mentor.

Then, she compared her first experience with Direk Lauren with their working relationship in And I Love You So.

ON LOVE SCENE WITH SAM. Aside from being cautious not to overdo her dramatic scenes, Bea also prepared physically for the much-talked about "love scene" with one of her leading men, Sam Milby.

And what's her secret to keeping her fit body? Aside from eating boiled eggs and saba (boiled bananas), Bea also plans to resume her Bikram Yoga sessions, which helped a lot in maintaining her figure.


SYNOPSIS. When Lara (Bea Alonzo) lost her husband of five months, she didn't think she could go on living, much less love again.

Now, seven months later, Lara is still in mourning. Every time a loved one died, someone else was there to cushion the blow. When her mother died when she was 14, it was her father. When her father followed six years later, there was the rest of the family. But when her husband died, no one could offer any consolation—not her siblings, not her in-laws, not her friends. Not only was he the love of her life, he had also become her life. It would have been better if she had died with him.

In the meantime, her business has taken a nosedive. She's also deep in debt with her unpaid condo and car mortgages.

With all these problems in her life, how would Oliver (Derek Ramsay) and Chris (Sam Milby) figure in her life? Will she finally move on?

Watch Bea, Sam, and Derek as they give life to a story about love, loss, and letting go in And I Love You So, which will premiere on August 12.