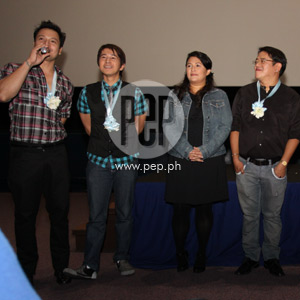 Actress and TV host Janice de Belen is very happy with her debut in independent filmmaking, via the drama film The Last Viewing. The premiere night of the film took place at SM Megamall last July 28, 2009.

In the movie, Janice plays a heartless crematory supervisor who loses her only daughter (portrayed by Maro Panganiban). Her character has a crush on the company's messenger, portrayed by Leandro Baldemor, while Sherwin Ordoñez is cast as the brother of Janice who eventually leaves to work in Saudi.

According to the Sis host, working on an independently produced film was very refreshing, compared to her previous experiences in commercial films.

"When we did this, we did this mainly because we like this project...In this movie, the concern was more to do a good job and make a good film rather than to make a lot of money," Janice explained.

Even though she has not been acting in front of a camera for several years now, the 40-year old actress said that was very natural for her to resume doing crying scenes for this film. Janice is an accomplished actress who received the Best Actress trophy for the 1991 Metro Manila Film Fest entry Kailan Ka Magiging Akin, directed by Chito Roño.

Is she prepared to act in, or produce, more indie films?

Will The Last Viewing be showcased in a film festival abroad?