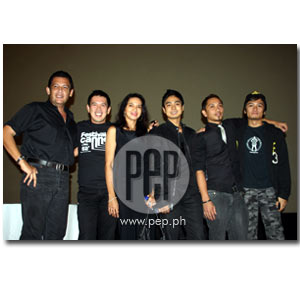 Almost all seats of Cine Adarna were filled up last night, July 30, during the Philippine premiere of Kinatay (The Execution of P). The celebrated film of Brillante "Dante" Mendoza was finally screened in the country, allowing Filipinos to watch the movie that earned for Direk Dante the Best Director Award in the 62nd Cannes International Film Festival.

Celebrities who attended the invitational premiere night at the UP Film Institute in Diliman, Quezon City were Richard Gomez and his wife Lucy Torres as well as the father and son tandem of Ping and Pen Medina. Coco's co-stars in Tayong Dalawa Alessandra de Rossi and Jake Cuenca also made it a point to watch the film. Also spotted in the audience that night were Karylle, Ketchup Eusebio, and Mara Isabella Lopez, the daughter of Maria Isabel Lopez.

Directors Paul Soriano, Lino Cayetano, Gil Portes, and Mark Meily were also present during the screening. Direk Mark also appeared in Kinatay as a teacher in the School of Criminal Justice, where Coco's character is a student.

After the screening, the crowd gave a hearty round of applause for director whose films have become known internationally, namely Foster Child (2007), Tirador (2007), and Serbis (2008). Direk Dante and the cast members of the film then participated in an open forum for the benefit of the audience gathered that night.

Coco Martin, Maria Isabel Lopez, John Regala, and Jhong Hilario were seated with Direk Dante, Carlos Siguion-Reyna and Ed Lejano of the UP Film Institute in order to answer questions from the audience, composed of their friends and members of the academe.

Direk Dante said that he spent almost two days defending the screening of his film since the MTRCB is claiming that the University of the Philippines and the Cultural Center of the Philippines should no longer be considered censorship-free areas.

Since they were at a standstill regarding the fate of Kinatay, Direk Dante agreed to have his film previewed by the Movie and Television Review and Classification Board (MTRCB) but on one condition: If the MTRCB cuts his film, he will not allow Kinatay to be screened at UP Diliman.

Kinatay was then given an R-18 rating, approved without cuts.

The film shows a day in the life of Peping (Coco Martin), a Criminology student who becomes a witness to the merciless killing of a prostitute (played by Maria Isabel Lopez). The murderers transported the prostitute to a house in Bulacan where she was raped and butchered, with her body parts strewn in garbage dumps all over the metro.

During the open forum, Gabriela Women's party-list representative Liza Masa told the crowd that she was a co-author of House Bill 6425, which aims to abolish the MTRCB and replace it with the Movie and Television Classification Board (MTCB).

Another person asked if the cast members did anything special to compensate for the darkness of the film.

In the movie, Jhong Hilario's character raped Maria Isabel before she was killed and hacked to pieces. Jhong greeted Direk Dante a happy birthday since the filmmaker was celebrating it that day. "I'm so proud na ginawa ko ‘tong pelikulang ‘to. First indie ko po ito."


WHY NOT CINEMALAYA? Why did he choose to screen his film at the University of the Philippines instead of having

He is referring to the fact that his film Serbis was edited out by the MTRCB before it was allowed to be screened publicly in theaters.

PEP (Philippine Entertainment Portal) asked if he had any regrets about not being able to screen his film in Cinemalaya.

Direk Dante revealed that he got the idea for this movie when he was conducting research for his 2007 film Tirador. "He was a witness to this killing. First-hand experience niya yun, e. So, yun ang interesting dun."

In one scene of the movie, Peping was able to board a bus that would have taken him elsewhere. However, he decided to return to the house where the murder took place. Direk Dante explained that the character was actually weighing his options at that time.


Where else can viewers watch his film Kinatay?

Kinatay will be screened at the UP Film Institute this August before having a regular run in select theaters.