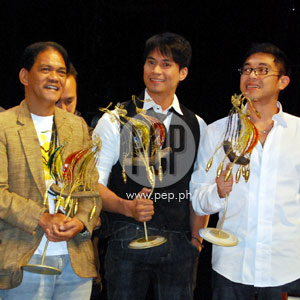 (From left) Cinemalaya 2009 Best Actor Lou Veloso of Colorum, Best Supporting Actor Arnold Reyes of Astig and Best Director GB Sampedro of Astig hold up the Balanghai trophies that they received during the fifth edition of the annual film festival.

There was no red carpet at the Cultural Center of the Philippines but it was elegant just the same.

Last July 26, stars and personalities of Cinemalaya Cinco walked on a red wooden plank that was laid out at the main lobby of CCP. The organizers also set up a photo wall where hosts Gabe Mercado and theater actress Kalila Aguilos could interview the stars before they entered the venue.

The very first couple to walk in was Alfred Vargas and his current girlfriend Yasmine Espiritu. The GMA-7 actor portrayed the role of an FX driver in Colorum, one of the full-length films that competed at the recently concluded fifth edition of Cinemalaya Philippine Independent Film Festival.

One of the highlights of the Cinemalaya Cinco awards night was when a teary-eyed Lou Veloso accepted his Balanghai trophy for Best Actor at the CCP Main Theater.


Lou portrayed the aging ex-convict Pedro in Colorum. "[To] all the actors of Cinemalaya Cinco, I would like to share this award, especially to my leading man, Alfred Vargas," he quipped.


The project proved once again Lou's versatility as one of Philippine entertainment's seasoned actors.


Before the Balanghai trophies were handed out, the presenters read the citations given by the jury regarding each category winner. Among the presenters that night were Dennis Trillo, Baron Geisler, Irma Adlawan, Johnny Delgado, Alfred Vargas, Ryza Cenon, and Lance Raymundo.

This year's Best Picture, Veronica Velasco and Jinky Laurel's Last Supper No. 3, was cited as Best Film "for the sheer panache of its storytelling, its treatment of comedy as an accessible and artistic form, its satirical depictions of individual naivete and the social fabric, and its ability to give us something to laugh and think about at the same time..."

As Best Film in the full-length feature category, Last Supper No. 3 won P200,000 cash award, a Balanghai trophy and a post-production package worth P1 million from Roadrunner Network plus a certificate for full audio post remix and remastering services from SQ Film Laboratories.

Two films tied for Special Jury Prize: Colorum was cited "for portraying the moral differences between being idealistic and having principles in a captivating road movie about a young rookie and an aging ex-convict..." while Ang Panggagahasa ni Fe was cited "for its mediations on the plight of Filipino women in a provocative tale that blurs the boundaries between the mundane and the mysterious, the real and the fantastic..." The Special Jury Prize was given to these two films for "being exemplars of the possibilities of filmmaking."

Best Direction went to GB Sampedro for Astig. He was cited "for storytelling excellence and technical brilliance in weaving the elements of the cinema into a coherent tale of tragedy and chaos..."


The Best Actress trophy went to Ina Feleo for Sanglaan. She gave life to a pawnshop counter girl for the aforementioned film, making this her second triumph in the same category for the 2007 Cinemalaya entry Endo. Ina was unable to receive her award personally so her sister Ana Feleo accepted it in her behalf.

SHORT FEATURE CATEGORY. In the short feature category, the Best Film award went to Bonsai by Borgy Torre. Bonsai was cited "for its story of hope and pain in love that can and do exist even in the most ordinary of circumstances..." Bonsai won P100,000 cash award, the Balanghai Trophy, and a Canon XHA-1 kit pro video worth P220,000. Audience Choice award went to Tatang by Nico Hernandez.

The Special Jury Prize in the short feature category went to Blogog by Milo Tolentino "for the power of its imagery and its depiction of the enchantment of childhood..." Meanwhile, Best Direction went to Dexter Cayanes for Musa and Best Screenplay went to Mark Philipp Espina for Behind Closed Doors.

For the first Cinemalaya-Network for the Promotion of Asian Cinema (NETPAC) prize, a new section of the Cinemalaya, the honor goes to Baseco Bakal Boys directed by Ralston Jover. The film stars Gina Pareño and real-life children metal divers based in Tondo.

Michael Sandejas' Dinig Sana Kita was winner of the National Council for Children's Television Award, which is given to the film that promotes family values. The award hopes to encourage young filmmakers to create quality content for children. Dinig Sana Kita also won the Audience Choice Award in the full-length category and as such won a 50,000 peso cash award.

During the awards night, CCP president Nestor Jardin lauded the impact of the annual film festival on the local movie industry and the viewing public.


"Those of us members of the Cinemalaya organizing committee find it hard to believe that in a very short period of five years, Cinemalaya has gone this far, that the audience, critics, members of the media and our foreign guests are unanimous in saying that indeed, Cinemalaya has helped start an independent film movement in our country. And this is a movement that has been producing quality films that tell us unique and inherently Filipino stories, a movement that is discovering new breeds of Filipino filmmakers, and a movement that is helping build a critical and appreciative audience of Filipino films."


Mr. Jardin recalled that in the 2008 Pusan International Film Festival, the Philippines was branded as "the new Mecca of independent filmmaking in Asia." Since the initial installment of Cinemalaya in 2005, more than 100 indie films have been produced, a number of which have gone on to win prestigious local and international awards.

Statistics from CCP indicate that 38,000 viewers watched films during the nine-day period of Cinemalaya.