(UPDATED) And I Love You So will hold intl screenings 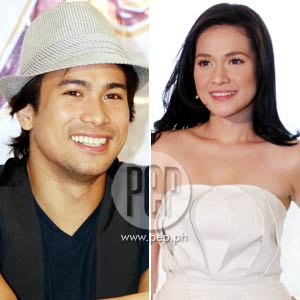 Bea Alonzo says about her mentor Lauren Dyogi who directs And I Love You So, "Na-feel ko uli na raw ako." Bea and Sam Milby will be paired together on the big screen for this Star Cinema movie that will premiere in the Philippines on August 12, 2009.

Bea Alonzo takes on a mature role in her upcoming film And I Love You So, a contemporary drama about love, loss and letting go. Her character named Lara is a widow who is torn between her affections for Oliver (Derek Ramsay) and Chris (Sam Milby). Will she be able to move on with her life and choose the man who will be able to give her the happiness that she deserves?


And I Love You So is directed by Laurenti Dyogi, who has been one of Bea's first acting mentors, as early as during her Kay Tagal Kang Hinintay days. The movie also serves as a comeback of sorts for Direk Lauren, whose last film, All My Life, starring Aga Muhlach and Kristine Hermosa, was screened way back in 2004.

In a previous interview on The Buzz, Bea recounted how she and Sam Milby were able to do their first love scene together. "They have to play music para to put us in the mood," revealed Bea.


And I Love You So marks a milestone in Bea's career since she will be seen wearing a two-piece bikini for the first time on the big screen.


In a previous interview, Sam mentioned that his leading lady looked "yummy" in this film. What is her reaction to this?

The two lead stars were asked to whom they would utter the words "And I love you so."

Without any hesitation, Sam said, "I'll say it to Bea. She's been someone that's been so nice to me, the whole time through showbiz. Malaking tulong siya sa acting ko, in all the projects I've done. She's been so caring."

And when it's Bea's turn, the young actress said that she'd rather say it to Sam as well.

And I Love You So will have its premiere night at SM Megamall, Cinema 10 on August 11. The movie will open in Philippine cinemas by August 12, 2009.