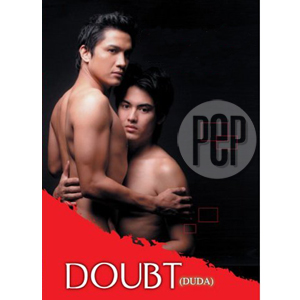 Duda/Doubt is now being shown at IndieSine in Robinsons Galleria on selected dates of March and April. It is paired with the film Bathhouse, directed by Cris Pablo. The writer-director is also known for his films Pitong Dalagita and the 2006 Cinema One Originals finalist Metlogs.

The Independent Filmmakers' Cooperative (IFC) of the Philippines and Robinsons Galleria Movieworld - Ortigas brings back the landmark movies Duda/Doubt (2002) and Bathhouse (2003). These were the first and second independent full-length digital video movies to be shown in local commercial cinema venues in their original video format.

IFC presents Con-queer-ing INDIE SINE: The Queer Cinema of Cris Pablo which is a double-feature screening of Duda and Bathhouse on the following dates: March 30, 31, April 1, 2, 3, 4, 9, 10.

Duda/Doubt tells the story of Cris (Andoy Ranay), a documentary filmmaker with a well-regarded body of work and a large community of friends and admirers. He is also gay, and possesses a voracious sexual appetite, claiming to have had sex with over 4,000 men during his years of frequent cruising. But Cris has fallen for Eric (Paolo Gabriel), who has sworn off meaningless sex for the pleasures of monogamy. The tensions between the two take a heavy toll on Cris, leading to a suicide attempt. Duda/Doubt was screened at the 2004 New York Asian-American Film Festival. This film stars John Lapus, Rey Pumaloy, Jojo Nones, and Bel Clerigo.