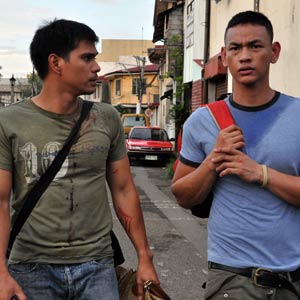 Nilo Vergara (Paolo Rivero, left) and his brother-in-law (portrayed by Janvier Daily, right) run away from the law in Bayaw. This Cinemalaya-NETPAC entry will be screened in Robinsons Malls starting September 2, 2009.

Perhaps no other medium has been more zealous in bringing homosexual life to light—whether the public wants to see it or not—than independent cinema. After the advent of digital technology effectively neutralized the prohibitive cost of 35mm film and made moviemaking accessible to anyone who wanted to tell a story, gay filmmakers started feverishly making up for lost time. Taking their cues from the furtive efforts of Lino Brocka and Mel Chionglo from within the studio system (the Macho Dancer movies), independent filmmakers started exploring the sordid, shadowy recesses of gay sex (Brillante Mendoza's Masahista, Cris Pablo's Duda), then tackling the aches of same-sex relationships (Ellen Ongkeko's Mga Pusang Gala) and the pains of growing up gay (Jay Altarejos' Ang Lihim ni Antonio).


After Ang Lee's Brokeback Mountain made a splash at the 2006 Oscars, perhaps it was inevitable that local gay cinema would soon invert stereotypical images of masculinity to suit its own narrative purposes.


In line with this, Monty Parungao released Bayaw, which had its debut this past July as a competitor in the Network for the Promotion of Asian Cinema (NETPAC) section of Cinemalaya.


Gay cinema is defined, for better or worse, by its verboten status in society. Ang Lihim ni Antonio harnessed some potent gay fantasies: having your way with the attractive friend/hunky uncle who is lying asleep beside you. Bayaw, as its title suggests, utilizes another forbidden scenario: having your way with your strapping brother-in-law.


The twist is, neither of the film's two lead characters—a disgraced police officer named Nilo Vergara (softcore and indie film veteran Paolo Rivero), and his wife's brother Rhenan (Janvier Daily)—are actually gay. Humiliated for being made a fall guy for a drug bust gone wrong, Nilo kills his harpy wife Pia (Kaye Alipio) in a fit of rage, and goes on the lam with his hapless brother-in-law. Over the course of trying to elude the law, the duo fall in with a petty thief (Andrew Miguel) and on occasion vent their sexual frustrations on each other.


Whereas Brokeback Mountain's conceit lies in plumbing the depths of tenderness that masculinity takes pains to hide, Bayaw makes no apologies for how oppressive male heterosexuality can be. The peripheral gay characters are either used as cash cows (Rhenan allows himself to be fellated by the neighborhood hairdresser to earn some gambling money) or portrayed as unwitting victims (a shrieking commuter is caught in a sudden tricycle chase).


After cutting his teeth on softcore videos for Viva Home Video, Monty Parungao has developed a stylish visual sense. He photographs the slums and side streets of Manila in a manner that is so claustrophobic, it seems that the characters are forever running without actually getting anywhere. There are also nighttime scenes lit by fires that summon the oblique lighting techniques in John Carpenter's Escape from New York—another movie that portrays an entire city that has literally been transformed into a prison.


While I wish that Parungao had been more stringent in developing his narrative, applying more logic to his characters' motivations (the two leads mystifyingly allow a snatcher who had earlier victimized them into their inner sanctum) and being more conscientious in his structuring (a late-in-the-movie revelation which implies that the murdered wife got the fate she deserved feels a bit contrived), Bayaw eventually comes to the same conclusion as Brokeback Mountain, albeit via a route that is more violent and less scenic: It ain't easy being a guy.