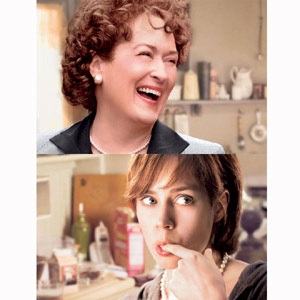 
Before Ina, before Rachael, before Emeril, there was Julia, the woman who forever changed the way America cooks. But in 1948, Julia Child (Streep) was just an American woman living in France. Her husband's job has brought them to Paris, and with her indefatigable spirit, she yearned for something to do.


Fifty years later, Julie Powell (Adams) is stuck. Pushing 30, living in Queens and working in a cubicle as her friends achieve stunning successes, she seizes on a seemingly insane plan to focus her energies. Julie decides to spend exactly a year cooking all 524 recipes in Julia Child's Mastering the Art of French Cooking (which Child co-wrote with Louise Bertholle and Simone Beck)--and write a blog about her experiences.


Director-writer-producer Nora Ephron seamlessly melds these two remarkable true stories into a comedy that proves that if you have the right combination of passion, obsession, and butter, you can change your life and achieve your dreams.


"It's about love, it's about marriage, it's about changing your life," says Ephron of the themes that motivated her to make Julie & Julia. "I'm obsessed with food, but there were at least eight other reasons why I had to do it, like doing things you care about and finding happiness through that."


"Both stories were going to be about marriage and food, two things that certainly go together in most people's lives," says Ephron. "When you're in the romantic comedy business, the movie ends when people say ‘Will you marry me?' It's very rare to find something about what happens next, where you've got two equally smart people in a relationship who adore each other. It's one of the reasons I think Meryl was completely drawn to the movie."


Streep and Adams agreed that Ephron's screenplay got at something elemental about the soul-edifying and appetite-satisfying journey of these two women. On set, she took to bringing the script to life with plenty of passion and grit herself. "She has such a personal attachment to these characters," says Adams. "She really fights for them, so whenever I was stuck with something, I could always turn to her. Nora is also one of the best people to go out to dinner with, because she knows exactly what to order so you get a wonderful dining experience!"


Streep is in awe of Ephron's ability to weave humor into her movie's themes. "Her deftness as a writer is a great gift, how secretly she sneaks in what she's talking about," says Streep. "There's subtlety in the humor, so that the film is very, very funny but it doesn't set out to have any jokes. You laugh with these people, but you feel for them as well, and it's a great thing she was able to do."