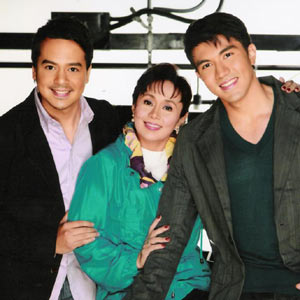 The Star Cinema film In My Life marks the return of Vilma Santos to the big screen after five years. It also marks the first time that John Lloyd Cruz (left) and Luis Manzano agreed to have a kissing scene with each other, which was shot on Brooklyn Bridge in New York.

In In My Life, Star Cinema's newest film offering, Vilma Santos plays an aging teacher who resents the fact that her children are moving away from her as they are growing older. To battle loneliness, she moves to New York to live with her son, played by Luis Manzano. She then gets to meet her son's boyfriend, played by John Lloyd Cruz. She gets close to the boyfriend, but a string of tragedies threaten the close relationship.

Despite the gay theme, the movie's director Olivia Lamasan said that In My Life should not be treated solely as a gay movie.

"The concept is the story of a woman, a journey of a mom, and the friendship that blossomed between her and her gay son's lover," she said during the movie's press con last August 25 the Dolphy Theatre of ABS-CBN. "This is not a gay movie."

In My Life features the Star for All Seasons in an entirely different role. Known for her previous works as an activist nun (Sister Stella L.), a sexy dancer (Burlesk Queen), a suffering mother (Dekada ‘70), and a liberated woman (Bata, Bata Paano Ka Ginawa?), Vilma now plays a mom who can't accept the fact that there will come a time when her children will eventually leave her.

Writers Senedy Que and Raymond Lee said the role is tailor-fit for Vilma (as well as John Lloyd). The challenge, they said, was to find what role the award-winning actress hadn't done before.


VILMA SANTOS. Vilma said she chose the Pinoy OFW movie In My Life as her comeback film because she feels "challenged" to do it.

However, it took a while for her to accept the project, because it meant spending time away from her duties as the governor of Batangas. When Star Cinema offered the movie to her two years ago, she said she had to say no to it because she had just won the government seat.

After some years of serving as the provinces' mother, Vilma finally said yes to play another one-of-a-kind mom role. She said she can never leave the biz.

In My Life, for her, is a very different experience.

When the children of Shirley (Vilma's character) grow up and begin to have lives of their own, she thinks that nobody loves her anymore.


JOHN LLOYD CRUZ.In My Life, meanwhile, was a fulfilling movie for John Lloyd Cruz. He compared working with the Star for All Seasons and Director Olivia Lamasan as a skydiving trip.

John Lloyd added that he was more fascinated with how Vilma was in real life, than during shooting.

It was also the first time John Lloyd tackled a gay character in In My Life, where he had a screen kiss with screen partner Luis Manzano. But the Kapamilya actor said he wishes people won't go to the movie just to witness that particular scene, which was shot on Brooklyn Bridge in New York.


LUIS MANZANO. Direk Olive said that when she asked Luis Manzano to play the role of Mark, Shirley's gay son, she was so confident he would accept the project. She was shocked when he didn't.

But the director sees in Luis the "vulnerability and sensibility" she needed for the character, so she asked him to read the script first before disagreeing completely. Luis thankfully accepted the role after understanding the whole film concept.

Now that he had already finished shooting the movie, Luis said he learned to become a better actor.


SYNOPSIS. Shirley (Vilma Santos) is a woman who wants to be in control of everything. As a librarian in a public school, a simple glance from her makes students tremble in fear.

But in her family, Shirley's unwarranted intervention in the lives of her children and their families keeps her emotionally detached from them. Realizing that she has lost the command she once had, Shirley goes to New York to reunite with Mark (Luis Manzano), her estranged gay son who unknowingly suffers from colon cancer.

But living in New York comes with a cost. She has to live with her son's lover Noel (John Lloyd Cruz), who is an illegal immigrant. Whenever Mark is not around, Noel makes it a point to tour Shirley around the city even though he has to endure the mother's degrading behavior towards him.

Would Shirley finally achieve a happy ending in New York, with her son, or should she go back to the Philippines to seek her heart?

In My Life, produced by Star Cinema, will be screened in cinemas starting September 16, 2009.