Katherine Heigl, in search of Mr. Perfect in The Ugly Truth 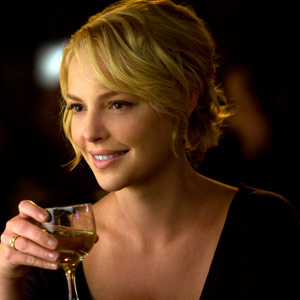 Katherine Heigl (who is best known for the medical drama Grey's Anatomy) plays a career woman in search of Mr. Perfect in the romantic comedy The Ugly Truth.

At the center of Columbia Pictures' new romantic comedy The Ugly Truth is a woman who doesn't want to believe there could be an ugly side to Mr. Right: Abby Richter, a tough, savvy career woman who has long approached dating as a job, one which she unfortunately believes requires checklists, dogged research and a set of standards so relentless no one has come close to meeting them yet.


She would say she has high expectations but somewhere out there she believes there exists a man who will sweep her off her feet regardless. Who that man actually is, however, she could never have seen coming.


To play Abby, the filmmakers were looking for a leading lady with the smoldering silliness of a classic screwball comedienne, able to deliver a crackling one-liner while simultaneously possessing a vulnerable sensuality and a slapstick sensibility. Such actresses aren't a dime a dozen, so the list of contenders was short and quickly narrowed down to one name.


Recalls producer Gary Lucchesi: "One day one of the writers asked: ‘Have you thought about Katherine Heigl?' The moment I heard that, that was it. It was a great idea, we knew she was right and we pursued her vigorously."


Heigl, an Emmy Award winning actress for her role on the runaway hit television series Grey's Anatomy, has recently come to the fore in a number of screen comedies, most notably taking the lead role as the pregnant woman in question in Judd Apatow's critically acclaimed Knocked Up. The entire creative team thought she had just the right qualities to make Abby as believable as she is blundering.


For Heigl, taking up arms in the battle of the sexes was an irresistible proposition. "What I loved about the script is that it provides insight into what men are really thinking and why women get it wrong, and the other way around," she laughs. "We've all seen the standard romantic comedies, and I think there's always a place for them because I'm a big romantic comedy fan. But I like that The Ugly Truth takes that and brings a new edge to it. There's a lot of raw honesty in the story but instead of taking it too seriously, it lets you laugh and enjoy the absurdity of the dynamic that goes on between men and women."


Still, Heigl does have plenty of sympathy for Abby's plight as well, especially when it comes to dealing with Mike Chadway (Gerard Butler). "The beauty of the story is that it gets to both sides of the argument," she comments. "Abby is rightfully frustrated by her relationships with men and rightfully confused and thrown for a loop when she starts to fall for a guy like Mike who doesn't appear to have a romantic bone in his body."


The greatest joy of all for Heigl was verbally jousting with Gerard Butler. "I have a real love of that sort of old Hollywood repartee that you don't really see much anymore," she says. "Gerry and I found that fast-paced, sparring dialogue so much fun. Even in your regular life, if you're out with another couple and they've got that great witty thing going, it's the most entertaining thing to be a part of. And it kind of just happened seamlessly between us."

Opening soon across the Philippines, The Ugly Truth is distributed by Columbia Pictures, local office of Sony Pictures Releasing International.