Filmmakers take a LEAP for volunteerism 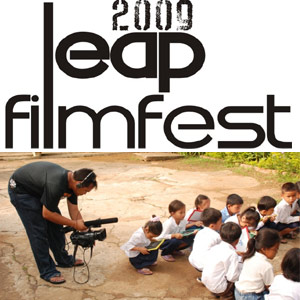 Panudlak (Welcoming the Dawn) is one of the films showcased in the first edition of the Leap International Developmental Film Festival. The chosen advocacy films will travel to Shenzen, China in October and to Hanoi, Vietnam in December.

Independent filmmaking in the Philippines just got busier. For filmmakers who have a big heart but have not yet gathered the guts to join a major film competition, this is a great opportunity for you.


"The films we show are intended to educate the people, especially the young," says Arvin Dimante, the festival director. "It's kind of difficult to introduce a new film festival but we are very happy about it."


Fourteen films, produced mostly by non-government organizations, were chosen for screening. The first batch of films were collected by tapping embassies and volunteer NGOs worldwide. These touch subjects such as sexual crimes against women and children, environmental projects that advance the welfare of people in small communities, and experiences of community volunteers.


The annual festival will accept entries of any film genre, even animation, but these must be centered on the developmental themes announced for the year. The festival will start accepting entries for 2010 in January when it will also announce the next themes.


There is also no limit to film length or treatment, but heavy subjects must be discussed with sensibility and that the films should not be used to make political statements benefiting a certain party.


"We have no strict requirements but the films must have a developmental content," says Dimate "It must have a suggestion and a solution at the end. This year, the main theme is volunteerism."


Panudlak tells the story of two VSO volunteers who were sent on a two year mission to impoverished villages in Cambodia. The progress of their mission is told against the background of the panudlak, the ancient Hiligaynon planting season ritual used as a metaphor for sowing and reaping graces through volunteer work.


RV Diaries, on the other hand, is a documentary on how the lives of two VSO volunteers changed after coming from their missions abroad.


"While working on the film, we thought of brain drain in the Philippines. Like why send Filipinos to volunteer abroad when people in our country need help? But when the volunteers returned, we saw that they appreciated the country more. Lumawak ang perspective nila sa mundo," Paz shared.


Other films that will be screened are Barometer by Rico Panganiban; Daughter, A Story of Incest; Red Leaves Falling; and A Good Boy, A story of phedophilia by Monica Ray; Bound by the Bay and The Fields of Sta. Josefa by Elnora Imbing Ebilio; Nomad Camp 7 by Ulysses Sison; Curitiba, It's Possible by Paul Romauch; Organic Life by Ha Thi Lan Anh; Still Life Moving by Paul Zetter; The World in Orbing Colors by Mai Dinh Khoi; and In Homonhon by Cha Escala.


The festival will also have a nationwide campus tour from November 16, 2009 to March 2010. In October, it will travel to Shenzen, China and to Hanoi, Vietnam in December.


Filmmakers who are interested in being part of next year's Leap Film festival can contact Arvin Dimate at Tel. No. 212-9499 and 09291838518. Interested parties can also email them at info@leapfilmfest.org or visit www.leapfilmfest.org