500 Days of Summer will hit the big screen this October 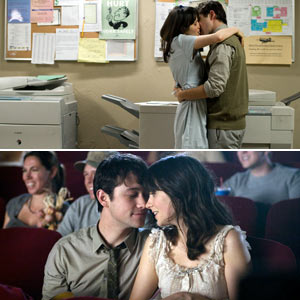 Zooey Deschanel and Joseph Gordon-Levitt are smitten with each other in the upcoming romantic film, 500 Days of Summer.

For those who have loved and have been dumped, 500 Days of Summer takes the hopeless romantics back in time when their whimsical hearts have been crushed that leaves them holding on to bittersweet memories.


500 Days of Summer casts away all pretensions in a boy-girl relationship in a funny true-to-life and unique dissection a young man's no-holds-barred love affair starring Zooey Deschanel (Yes Man) and Joseph Gordon-Levitt (G.I. Joe). In the movie Tom (Levitt) believes in a lightning-strikes-once kind of love. Summer (Deschanel), on the other hand, doesn't. But such reality doesn't stop Tom from going after her, again and again.


Day 1 begins when Tom, a would-be architect turned sappy greeting card writer encounters Summer, though seemingly out of his league, Tom soon discovers that they have a lot in common.


Fast forward to day 32, things have moved ahead between them, "casually." Tom is irreparably smitten, living in a giddy, dreamy world of Summer on his mind. By day 185, things are in a limbo—the story winds back and forth through Tom and Summer's on-again, off-again, sometimes blissful, often tumultuous dalliance. Theirs is a kaleidoscopic portrait of a relationship from the dizzying stage of infatuation, dating and sex to separation—the movie then takes us to a whirl of time jumps, split screens, karaoke numbers and cinematic verve, in a fusion that tends to engage us as to the why and the how we still struggle so laughably and cringe so hard to make sense out of the word we call love...and to hopefully make it real.


Director Marc Webb, who marks his film debut with 500 Days of Summer, lost interest in the romantic comedy genre somewhere between his puberty stage and when he started paying taxes. But when one day he finally got to read the work of writers Scott Neustadter and Michael Weber, a script that is equally autobiographical—something clicked. 500 Days of Summer as he found out is about a conjured up relationship that is both artful and truthful. "We all know Summer because Summer isn't just a girl. She's an event. I met my first Summer when I was 17. She got me to skip class. At the time, I believed that love was the magic pill that would connect my soul to the universe," says director Webb.


He further notes that "In making this movie, my first feature film, it is the happy ending that I didn't have with Summer. It's a whiff of the uncynical kid. Because under the humor and the whimsy of 500 Days of Summer, there's a fundamental truth at play: yes, love can be cruel, harsh and difficult but it's by far, the best thing life has to offer."