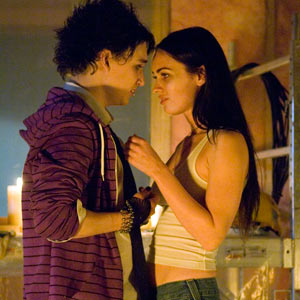 
In the movie, Megan Fox is the lusciously sexy Jennifer and Amanda Seyfried is her intelligent but insecure best friend Needy. Jennifer's Body tells the story of two small town girls who have been best friends for life even though they have nothing in common except their history together. While Jennifer is the ultimate high school sex symbol; dark, exotic and gorgeous, and a magnet for the male population of their town, Devil's Kettle, Needy, as her name suggests, is a plain and bookish girl who is dominated by her beautiful friend.


The riveting unique blend of horror, comedy and drama started when the two girls attended a concert at the local bar and the lead singer of the band ‘Low Shoulder' (Adam Brody) embarked on a satanic ritual with Jennifer as his unsuspecting victim. The horrific act goes horribly wrong and the result is that Jennifer turns into a cannibalistic, boy-eating zombie. No young male is safe from her clutches. Inextricably entangled in the bloody aftermath, Needy tries to save her friend, the boys in town, her own boyfriend and herself.


Diablo Cody reveals in the following Q&A interesting scenes to look forward to in Jennifer's Body.


Q: What is the film about?

A: "This film is about a teenage girl who becomes a cannibal and feeds on boys. Her best friend is the prototypical good girl who has to stop her. It is really a morality play. I think it goes beyond the typical horror comedy because there a lot of profound themes about growing up, femininity and the hostility between young women that is, in my opinion, nurtured and stoked by the media. I think that the relationships between girls are so complex and occasionally frightening that the subject lent itself to a cool, thinking man's horror movie."


Q: Is it saying anything particular about boys and men?

A: "No not at all. I love men but the film is about young girls. I feel that young girls are starving in different ways--sometimes literally. This hungry teenage girl is saying, ‘You know what? I'm tired of dieting. Not only am I going to eat, I'm going to feast on some spleen.' It is about the pressures on women."


Q: What do you think that the two leading female actors bring to their roles?

A: "Megan was an obvious choice. What is so fascinating about her is that yes, she's extremely beautiful, but she almost reminds me of James Dean or Steve McQueen for she has great charisma and coolness. There is not a whiff of insecurity about that girl. She was perfect for Jennifer because the character has to be powerful. The amazing thing about Amanda is that she is an incredibly talented actress and she's funny in a very understated way."

Q: Can you discuss the relationship between the girls?

A: "I think that most people have had a friend since childhood and will be able to identify with this relationship. You often get to a certain age and find out that you no longer have anything in common with your friend and yet you somehow maintain the friendship because it is so old. Same here. You see a classic power struggle between these girls; there is the ‘hot' one and the friend. It is a toxic relationship."


Q: Can you talk about the sexual friction between the girls?

A: "I just love the fact that there really is sexual chemistry between Needy and Jennifer and you see it at a couple of points throughout the film. It's definitely building during the film. That scene plays out between the girls and it's not exploitative (well it was exploitative actually) but I wrote it that way. I'm a big fan of exploitation films to be honest, a big fan. I want to see those girls kiss. Yeah, and it is hot."

A: "I actually loved high school but I was just a little weirdo. I didn't fit into any specific social group. I was bookish and quirky and surrounded by budding glamour girls who always made me feel inferior."


Q: How did you manage to be so in tune with teenage language, in both Juno and Jennifer's Body?

A: "In a lot of ways teenagers are my muses. I just think that the teenage years are so interesting because everything is heightened. Emotions and relationships are more intense. Friendships always seem like a matter of life and death. I like writing this kind of dialogue because conversations between sixteen year olds are much more interesting than the conversations between thirty year olds."


Q: How rewarding is the success you have achieved?

A: "It is nice to make money. That is always a good thing and it has given me the freedom to travel. I never saw the world until I wrote Juno. I've been everywhere and that's incredible. But there is really no upside to fame at all."

Q: What are your dreams?

A: "Oh my gosh. You know my dreams have already come true. But personally I would like to ride every rollercoaster in the United States. That's my biggest hobby. I would also like to direct a horror movie."


Diablo Cody also serves as the executive producer of Jennifer's Body. In 2004, she authored the critically acclaimed memoir Candy Girl. She won 18 awards for her debut screenplay Juno, including an Independent Spirit Award and the Oscar for Best Original Screenplay. She is also a columnist for the US magazine Entertainment Weekly. Recently, she wrote and co-created the American TV series, The United States of Tara for executive producer Steven Spielberg, starring Emmy nominee Toni Collette.