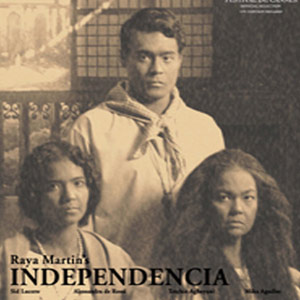 Raya Martin's Independencia stars (from left) Alessandra de Rossi, Sid Lucero, and Tetchie Agbayani. Aside from Independencia, A Short Film about the Indio Nacional will also be screened at the UP Film Institute from September 14-19, 2009.

Raya Martin's critically acclaimed films Independencia and A Short Film about the Indio Nacional will be screened at the University of the Philippines Cine Adarna from September 14-19, 2009.


The two films form the first two parts of a planned trilogy. The concept of the trilogy has two basic premises: first, that each film will be set in (not necessarily about) a particular period of struggle in Philippine history (the Spanish, American, and Japanese occupations); and second, that each will be made in an aesthetic prevalent to the period in question. Their narratives aren't causally linked, only thematically. The third film is in pre-production.

Meanwhile, A Short Film about the Indio Nacional (Or the Prolonged Sorrow of the Filipinos) which is Raya's first film, won the Best Film at Pesaro Film Festival in 2006. Both films are shot and will be screened on 35mm film.

The films are directed by Raya Martin, one of the most talented young filmmakers in the Philippines, whose films have been garnering critical acclaim both in the Philippines and around the world. His other film, titled Next Attraction, won the Grand Jury Prize in the Cinemanila International Film Festival 2008, and another work, Now Showing, was selected for the Director's Fortnight section of the Cannes Film Festival last May 2008.


The films are presented by Cinematografica Films. The screenings are dedicated to the memory of Alexis Tioseco and Nika Bohinc.

The schedules are as follows:

Early 20th century Philippines. The sounds of war signal the arrival of the Americans. A mother and son flee to the mountains, hoping for a quiet life. One day, the son discovers a wounded woman in the middle of the forest, and decides to bring her home. Years pass. Man, woman and child live in isolation from the growing chaos all over the country. But a coming storm soon threatens their existence, and American troops draw nearer.

Set in the 1890s brewing revolution of Filipinos against Spain, "Maicling pelicula nañg ysañg indio nacional " is a collection of silent film actualities revolving around an indio, the common man during the colonial times.