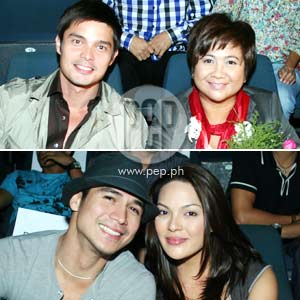 The commercial release of Kimmy Dora (Kambal sa Kiyeme) has caught everyone—theater managers and the movie's own producers included—by surprise. Ever since it opened last September 2, the movie has been causing a kind of frenzy rarely seen among local moviegoers. A source estimates that the comedy film has grossed P65 million already.


Long queues, cinemas packed to SRO (standing room only) capacity, and extremely pleased audiences have so far characterized the theatrical run of this comedy starring Eugene Domingo as twins with opposite personalities.


"The audience is literally going wild for Kimmy Dora," reports Robinsons Movieworld manager Bing Advincula. "In terms of the audience laughing so hard and clapping so often, it's one of the best. Many times you can't hear the next lines of dialogue because the laughter drowns out the audio," she says.


"Tuloy pa rin ang pasok ng mga tao kahit bagyo na sa labas [The people keep coming in despite the heavy rains outside]," observes Josen Ballesteros, a ‘checker'. (A checker is someone hired by the film distributor to monitor a movie's ticket sales.)


Judging by the ticket sales reports, the storm isn't about to die down anytime soon. Kimmy Dora's gross has been growing everyday since it opened.


Butch Ibañez of Solar Entertainment, which is distributing the film locally, notes that the movie has achieved something even much bigger hits fail to do. "Kimmy Dora's ticket sales on the second day exceeded its opening day performance. This is rare. And it's been growing daily ever since. It's the number one movie showing right now."


Glorietta and Trinoma cinemas had to stop selling tickets as seats ran out but several moviegoers insisted and gamely stood throughout the film. SM Megamall added a second theater during the past weekend. Eastwood announced a midnight screening late Sunday (September 6) to accommodate the overflow crowd.


It's not just the national capital region that has been hit by Kimmy Dora fever. Rofel Parreño, marketing manager for Robinsons Iloilo, notes, "Usually, the Ilonggo audience is more reserved than their Manila counterparts when it comes to showing their appreciation. But at the end of Kimmy Dora they clap spontaneously and whole-heartedly."


With a miniscule advertising budget compared to those of the TV network-owned studios, Kimmy Dora's marketers had to rely on new media like the Internet and its numerous social networking sites such as Facebook and Multiply to generate awareness and build up excitement. And now that a good number of people have gone to see the movie, the most effective and least expensive marketing tool is doing the advertising for the movie: word of mouth.

Eugene herself makes it a point to monitor the Facebook account of her film, which already has 7,400 fans to date.


After starring in her launching film, Eugene is expected to appear in the Dolphy's upcoming film titled Juan.