In My Life holds premiere screenings in Trinoma and SM Megamall 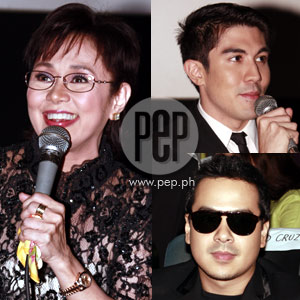 In My Life, starring Vilma Santos, Luis Manzano (top frame) and John Lloyd Cruz has been graded "B" by the Cinema Evaluation Board. It will be screened in 119 theaters nationwide starting this Wednesday, September 16.

Now that the problem between Star Cinema and SM Malls has been fixed, moviegoers now have the option of watching the latest project of ABS-CBN's film arm in the biggest movie chain in the country. In fact, it was announced that In My Life will be screened in 119 theaters nationwide starting this Wednesday, September 16.

Shot partly in New York, In My Life is topbilled by Vilma Santos, John Lloyd Cruz and Luis Manzano. The Olivia Lamasan film has been graded "B" by the Cinema Evaluation Board. Sarah Geronimo performs the movie's theme song, "Something New in My Life."

The story of In My Life revolves around Shirley Templo (Vilma Santos), a strict librarian who goes to New York to be reunited with her estranged son Mark (Luis Manzano). She is surprised to learn that her gay son is already living in with another man named Noel (John Lloyd Cruz), an illegal immigrant.

As she spends more and more time with her son's lover, Shirley realizes that she has become emotionally distant from her own son. This gap becomes apparent to her when Mark avoids telling her about his medical condition.

In this film, viewers will be treated to breathtaking view of the New York skyline and famous tourist spots of the Big Apple (including the Statue of Liberty).

Star Cinema exerted great effort in promoting In My Life, which is considered the comeback film of the Star for all Seasons. She last appeared in Mano Po III (2004).

The film had its first premiere night last Monday, September 14, at SM Batangas. Vilma Santos-Recto, who has been serving as Batangas governor since 2007, has always stressed that she sought the permission of her constituents before she accepted this movie project.

During the second premiere held yesterday, September 15, at Trinoma Quezon City, Vilma addressed the audience and shared her thoughts about her new film.

When asked to recount her favorite scenes in the movie, Ma'am Charo admitted that she liked a lot of scenes. "Marami...yung between Vilma and Luis nung sinabi niya he disappointed her again and the funeral scene between John Lloyd and Vilma. Congratulations for a wonderful movie and the great performances. I'm sure this will be a box-office hit."

Edu Manzano, Vilma's ex-husband, also took time to attend the screening in Trinoma. Luis even offered this movie as a birthday gift to his dad.

Right after the screening in Trinoma, the cast members proceeded to SM Megamall for the third and final premiere night of the film.

Other stars who graced the event were Vhong Navarro, Zanjoe Marudo, Charlene Gonzales, and director Rowell Santiago. Also spotted were fashion designers Rajo Laurel and JC Buendia. Even Batangas vice-governor Mark Leviste made it a point to attend the star-studded event.

In My Life will be screened in cinemas nationwide starting this Wednesday, September 16.