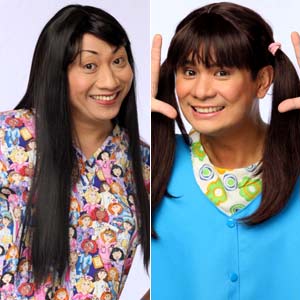 Michael V. (left) and Ogie Alcasid bring their famous television characters, Yaya and Angelina, to the big screen via Spoiled Brat the Movie. This joint venture of GMA Films and APT Entertainment will premiere on September 23, 2009.

"Whatever, you are such a loser!"

Not even comedian Michael V. could have predicted the impact of such phrase when they were conceptualizing a spoiled brat kid bullying her unassuming nanny.

But the parody spread so fast that the characters Yaya (portrayed by Michael V.) and Angelina (Ogie Alcasid) became an instant national phenomenon on the verge of breaking out internationally thanks mainly of course to the Internet.

First seen as a segment in the longest running comedy gag show, Bubble Gang, Yaya and Angelina soon broke out of the Friday evening mold to invade daily television viewing through the local franchise of the Japanese game show, Hole in the Wall, seen also on GMA-7.

But the Yaya and Angelina proved too big, too hilarious to be confined on the boob tube that GMA Films and APT Entertainment decided to join forces to deliver, Spoiled Brat the Movie—a project meant to maximize the characters along with their respective peculiarities.

BIGGER LAUGHS. The movie promises to deliver more crazy antics and hilarious misadventures not witnessed before on television.

The film aims to highlight many catfights between the two lead characters, which are distinct hallmarks of the entire dynamics of Yaya and Angelina relationship.

But more interesting are the slew of questions that the movie aims to answer.

"We want to present the background of the two characters," said Direk Mike with a smile. "Hindi naman kasi siyempre na-explore ‘yon when they first appeared to the public via Bubble Gang."

Questions the films hopes to shed light on are: How did Yaya and Angelina even meet? Is there another side to the spoiled brat Angelina? Who are the famous stars tapped to do cameo roles? What kind of misadventures will crop up, instigated mainly by Angelina?"

SOCIAL COMMENTARY. Aside from offering comic relief, the film hopes to impart important life lessons directed particularly to parents who are too busy and preoccupied to personally attend to their children's needs.

Yaya and Angelina (Spoiled Brat the Movie) will open in cinemas on September 23.