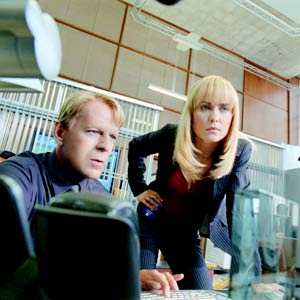 Surrogates will premiere in Philippine cinemas on September 25, 2009. This sci-fi film is based on Robert Venditti's popular graphic novel of the same title.

First the computer. Then email, tiny cell phones and the Internet. Today, sexy robotic surrogates fill in for their less attractive human counterparts—regular people who no longer have to venture out into the real world themselves. In the world of Touchstone Pictures' new sci-fi thriller Surrogates, has technology gone too far?

Based upon Robert Venditti's popular graphic novel of the same title, Surrogates is directed by Jonathan Mostow (Terminator 3: Rise of the Machines) and stars Bruce Willis, Radha Mitchell and Vhing Rames.

First-time author Venditti came up with the unique premise while working at Top Shelf Publications in their shipping warehouse in suburban Atlanta. Looking for a new spin on the graphic novel, Venditti recalled a sociology book he had read for one of his graduate school courses which depicted "an actual study of people who played one of those early community-type online games," says Venditti. "I was fascinated by how these people just became so involved in this game, creating these alternate personas for themselves. They became so identified with them that they would lose their jobs, their marriages, because they just couldn't separate their lives from this persona that they created. It was an idea that stuck with me—the basic human desire to be something other than oneself."

The author fleshed out his idea further by imagining various reasons people would have for using a surrogate. "My idea was to create this persona that would go to work and earn money for you, a practical reason for having a surrogate. I looked at the idea of self-improvement, where these surrogates represent plastic surgery to the extreme where you could maintain yourself as forever young, or be more muscular—look like your dream self."

Producer Max Handelman, a lifelong comic book aficionado, optioned the graphic novel from Venditti. He found the story's themes compelling. "The story really moves along at a great pace and allows you to imagine something that could impact our society someday. Are we all going to have surrogates? Probably not. But it's a metaphor for our society's increasing reliance on technology and increasingly virtual communication."

Handelman brought the comic to a college friend, veteran producer Todd Lieberman. "I was looking for something with an edge, a film noir-type story and I found that in Robert's story," says Lieberman. "The movie starts with two really attractive people outside of a club. All of the sudden, some guy approaches and they fall dead. You have no idea what's going on. In comes a detective, Bruce Willis' character, and his partner. And you realize pretty quickly that we're living in a world that's not our world.

"The two people who've been killed are actually surrogates," continues Lieberman. "Not only are the surrogates getting destroyed, but the people controlling them at home have been murdered, which is something that's never happened in the history of surrogacy. The entire world of surrogates is at risk because the fail-safe of not harming the user is the cornerstone of the technology."