See empowered women in All About Steve and Amelia 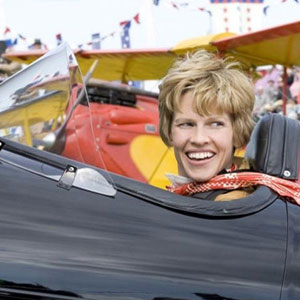 In today's filmdom reverberating with so much glitz, Sandra Bullock and Hilary Swank play it vanity-free in their upcoming respective movies All About Steve and Amelia.


Sandra Bullock stars in All About Steve opposite Hangover's Bradley Cooper. This hilarious tale is of a woman named Mary Horowitz (Bullock), a cruciverbalist (crossword puzzle constructor) who after falling hard for a guy named Steve (Cooper), thinks they're an item, on the other hand, he thinks she's stalking him.


For Mary, nothing is typical, especially relationships--her brain spins at warp speed with an endless stream of arcane information. She can come up with the perfect word--and dozens with the same meaning, but normal behavior eludes her. Mary, who just knows she's found her soul mate, decides to do anything and go anywhere to be with him. She begins to pursue Steve relentlessly as he crisscrosses the country, covering breaking news stories.


Bullock says getting into character wasn't always easy. "At first, I didn't know whom to model Mary after, so I had to start taking pieces of people whom I knew," she recalls. "I took a three and a half year old. I took Kim Barker, our writer. I took myself at my most amped and manic. Then I just pieced it all together."


Two-time Academy Award winner Hilary Swank is garbed as one of the most celebrated empowered woman of all time in the biopic Amelia co-starring Ewan McGregor, Richard Gere and Christopher Eccleston. The movie aviates when in the summer of 1937, Amelia Earheart (Swank) set off on her most daunting mission yet: a solo flight around the world that she and George (Gere) both anxiously foresaw as destined, whatever the outcome, to become one of the most talked-about journeys in history.


After becoming the first woman to fly across the Atlantic, Amelia was thrusted into a new role as America's sweetheart--the legendary "goddess of light," known for her bold, larger-than-life charisma. She became an inspiration to people everywhere, from First Lady Eleanor Roosevelt to the men closest to her heart: her husband, promoter and publishing magnate George P. Putnam, and her long time friend and lover, pilot Gene Vidal (McGregor).


Swank, known for her unconventional choices in her roles shared the following thoughts in a recent interview with Katie Krause of www.listall.com. "She's an inspiration, she's ahead of her time and a style icon. She did so much to help women and women's rights. It was a great honor to play the role."


Pioneering acts of empowered women in All About Steve and Amelia will soon hit local theaters from 20th Century Fox to be distributed by Warner Bros.