PEP REVIEW: In My Life shows Vilma Santos as a flawed mother 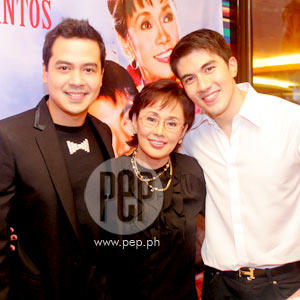 The stars of In My Life (from left) John Lloyd Cruz, Vilma Santos and Luis Manzano portray three people whose lives change tremendously after living in New York City.

The commotion during the premiere night of the new Vilma Santos-starrer In My Life at the Trinoma Mall last week was fierce! We were crushed by the crowd and roughed up by the security who would not let us into the photo opportunity at the red carpet. After that ordeal, we could only hope the movie is worth it. And thank God it's that good!


Veteran director Olivia Lamasan and screenwriters Raymond Lee and Senedy Que brings us a gem in Philippine drama: less tears but an absolute tearjerker; close to real life but richly plotted and unpredictable.


Vilma Santos plays the role of Shierly Templo, a sourly librarian suffering from empty nest syndrome, with her daughter Dang (Dimples Romana) planning to move to Australia with her family, and her estranged gay son Mark (Luis Manzano) living in New York. After a fight with Dang, she decides to visit Mark, only to be surprised that he is already living with another man named Noel (John Lloyd Cruz), an illegal immigrant.


In an attempt to win Shirley's approval and affection, Noel patiently chaperones her around the city and attends to her needs. After spending more time with her son's lover, Shirley realizes that she has become emotionally distant from her son and soon becomes jealous of Noel who seems to know Mark better now than her.


This gap deepened when Mark, despite Noel's coaxing, refused to tell his mother about his serious medical condition. As he is recovering from his illness, Shirley attempts to repair their relationship and the history of their mother and son relationship unfolds. But a dark cloud looms over them all and things will never be the same again.


For its exceptional casting alone, In My Life is amazing. Vilma aside, my heart goes out to John Lloyd, that rare dramatic actor who can make you cry just by seeing his eyes well up with tears. He portrays a lover quietly suffering Shirley's tantrums with restraint and grace, but at the same time, he makes it heartfelt and sincere.


I was surprised by John Lloyd and Luis' screen dynamic as a gay couple. They call each other as Babe, display very romantic photos in their apartment and as the movie ends, they share a tender kiss on Brooklyn Bridge. Onscreen, their love is sweet, hushed and terribly romantic; even more effective and memorable than most hetero screen pairings.


As for JLC and Luis being typecast in gay roles or catching social stigma, I have serious doubts about that, for onscreen, they are still as masculine and virile.


As for Vilma, she portrayed a multi-dimensional mother who learns to get off her high horse and deal with displaced motherly pride. Later in the movie, Shirley realizes that that even if she's done everything for her children, she failed to know them as persons. Unlike other mother roles she has done in the past, the Star for All Seasons depicts a flawed mother who eventually finds peace with herself and her past mistakes.


Another highlight of the movie is the dance sequence of Luis with his mother. Currently the Governor of Batangas, Ate Vi has been very vocal in saying that she is passionate about dancing and apparently her son inherited this love as well.


The audience is also treated to the amazing sights and landmarks of New York City. With Mark, Shirley, and Noel, the audience experiences a slice of middle class life in the city that never sleeps. In My Life also has witty one-liners and refreshing comic relief in between dramatic moments, effectively delivered by Vice Ganda. We wish he had more exposure in the film.