A Journey Home will premiere on October 3 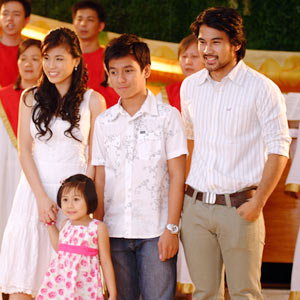 The actors of A Journey Home all had the same reason for accepting a role in this indie film: to impart lessons about life and family.

Toni Gonzaga, Joem Bascon, John Manalo, and even its director, Paul Soriano, all agreed that their talent fee for this independently-produced film was never an issue since they saw it as an opportunity to give back.

Joem, on the other hand, said that he considered his mother in accepting this project. He explained, "It's more of, 'yon nga, gusto naming gawin 'yong film, and very inspirational siya. Kinunsider ko rin for this film my mom, gusto niyang makakita na medyo family story naman ang gagawin ko.

SYNOPSIS. A Journey Home is an offering from Jubilee Evangelical Church that focuses on the importance of mending relationships. Its light drama story will make the audience reflect on their relationships especially when it comes to their family.

Estranged from his family for twenty years, Dante (Soliman Cruz) decides to come back and face his abandoned children, Raffy (Joem) and Kristine (Athena Tibi). While Dante is eager to make amends with them, Raffy does not want him back into his life. He realizes, however, that meriting forgiveness from a hardened heart requires much more effort that what he bargained for.


When an accident forces Raffy to take Dante into his house, Dante learns how his own failure as a father has made an impact on how his son acts as the head of his family. In his effort to make things right between himself and Raffy, Dante develops a bond with Raffy's wife Gayle (Toni Gonzaga) and his grandkids, Jake (John Manalo) and Tinka (Cha Cha Canete of Goin' Bulilit). Dante also rediscovers his love for music that Raffy's son is also passionate about.


With his growing relationship with Raffy's family, Dante begins to glimpse some hope for a second chance.


For how long can Raffy harden his heart? Will Dante finally get his second chance at happiness?


Athena Tibi stars as Kristin, the younger sister of Raffy who is equally scarred by their father's abadonment yet more forgiving in nature. She was last seen as a cast member in the musical play N.O.A.H. (No Ordinary Aquatic Habitat).


Lance Raymundo plays the chronic philandering husband, Henry, whose principles in life leave much to be desired. Lara Morena stars as Emmy, the efficient assistant of Raffy in his lending agency while Tia Pusit stars as Tita Nenita, the friend of Gayle who gives hope to Dante.

This indie film has been approved for competition in the upcoming Gideon Flame Christian Film Festival.