PEP REVIEW: Yaya and Angelina endear themselves to viewers for the last time 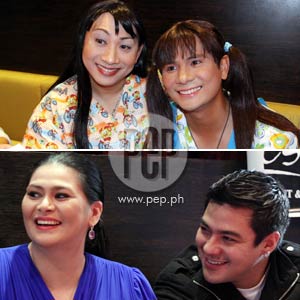 Michael V and Ogie Alcasid will endear themselves to moviegoers in Yaya and Angelina: The Spoiled Brat Movie. Viewers will also get to see Aiko Melendez and Jomari Yllana reunite on the big screen as the parents of Angelina. This comedy film is now being screened in cinemas nationwide starting today, September 23.

There is nothing in Yaya and Angelina: The Spoiled Brat Movie that you haven't seen before. Ogie Alcasid and Michael V. have been playing the roles of smart but mischievous Angelina and her doting but somewhat naïve yaya on Bubble Gang since last year, besides hosting GMA-7's game show Hole in the Wall in character since April this year.


So it is of no surprise that their movie based on the wildly popular Bubble Gangi skits turns out to be predicable. However, this film directed by Mike Tuviera offers some delightful turns and surprises that make it entertaining. Yaya and Angelina: The Spoiled Brat Movie follows the age old conventions of Filipino comedy films while adding some contemporary spunk.


Angelina (Ogie Alcasid) has a habit of pestering her yaya to the point of resigning and, at some instances, bodily harm, maybe even a body count (in the first five minutes of the film she managed to burn down their house; later on, she caused the explosion of a convenience store). She has also been terrorizing the students at her school, much to the chagrin of the school principal (Leo Martinez) and her teacher (Roxanne Guinoo).


This prompts the loving but busy parents of Angelina (played by Jomari Yllana and Aiko Melendez) to scout for a suitable replacement for their daughter. Enter Yaya Rosalinda Lucero, or Cha Cha for short (Michael V.), who seems to be more patient, nurturing, and loving than all of Angelina's previous nannies combined. They instantly clicked (they both speak Korean in a gag that doesn't really go anywhere but is inspired nonetheless), although this doesn't save the yaya from the pranks of Angelina.


Meanwhile, a terrorist group led by the voluptuous but ill-tempered Diva (Iza Calzado) plans to assassinate a duchess who will visit Angelina's school. When Angelina gets entangled in the terrorist's schemes, Yaya Rosalinda's love and patience for ward is tested.


Yaya and Angelina: The Spoiled Brat Movie follows the formula used by films such as the Okay Ka Fairy Ko films and movie outings of television sitcoms during the '90s (protagonists get involved in the evil plans of the film's villains). It doesn't really go well with Yaya and Angelina, as the characters already provide rich source of material. Although the plot allows the film to somewhat delve into its theme (the yaya as the surrogate parent in the Filipino homes), the conflict doesn't really give the characters time to shine. The gags are minimal and very tame. The film also has the tendency to overdo a punch line, ruining what could have been a good joke.


Still, the film delivers what it promises: good, clean fun. The characters often break the fourth wall, the jokes and gags are rooted in contemporary pop culture (although, as expected, the references are often based on Kapuso shows), and the cameos are entertaining—in short, it's everything you would expect from a local comedy movie.


Ogie, in particular, was a joy to watch. He has done similar roles on the big screen the last 10 months; this one may be his most endearing one yet. His is not a performance you'd call authentic, but Ogie seems to understand that the absurdity of the characters is part of the joke. The production, however, doesn't since they supposedly an effort to make Ogie appear smaller (an effort that didn't really work that well, too). Ogie and Michael V. certainly made Yaya and Angelina: The Spoiled Brat Movie their film.


Although the gags are nowhere near the ones they have done on Bubble Gang, fans of the "Yaya and Angelina" segment will not be disappointed. The only other person on the film who drew away attention from the leads was the lovely Iza Calzado. Her character (like any other character in the film) was not fully fleshed out. But as a manic, evil terrorist ringleader, this is probably Iza at her funniest (and prettiest).

I do not watch Bubble Gang regularly, so I was surprised to know "Yaya ang Angelina" seems to be a hit among the children. This was evident during the premiere of the comedy film at SM Megamall last Sunday, September 20.


Yaya and Angelina: The Spoiled Brat Movie is exactly the kind of film the young ones will enjoy. Don't watch Yaya and Angelina: The Spoiled Brat Movie and expect groundbreaking cinema. You watch to see Ogie Alcasid and Michael V. play two of the funniest and most endearing characters in the local entertainment scene together. And both of them certainly delivered. This serves as a fitting swan song since both Michael V and Ogie have decided that this will be the last time they will star in a project as the two beloved characters.


This comedy film is now being screened in cinemas nationwide starting today, September 23.