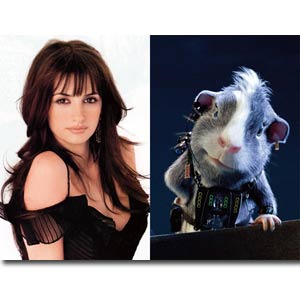 
"Juarez is a knockout you can't knock out," laughs director Hoyt H. Yeatman, Jr. about the character.


The director says Cruz was the perfect voice for Juarez. "Penelope Cruz is an amazing actress. I think this is the first time that she's ever done an animated character, but she brought a lot to the role. She has a beautiful, velvety voice, which is just amazing. It was great working with her."


G-Force tells of the latest evolution of a covert government program to train animals to work in espionage. Armed with the latest high-tech spy equipment, these highly trained guinea pigs discover that the fate of the world is in their paws.


Tapped for the G-Force are guinea pigs Darwin (voice of Sam Rockwell), the squad leader determined to succeed at all costs; Blaster (voice of Tracy Morgan), an outrageous weapons expert with tons of attitude and a love for all things extreme; and Juarez, a sexy martial arts pro; plus the literal fly-on-the-wall reconnaissance expert, Mooch, and a star-nosed mole, Speckles (voice of Nicolas Cage), the computer and information specialist.


Penelope Cruz has proven herself to be one of the most versatile young actresses by playing a variety of compelling characters and most recently becoming the first actress from Spain to be nominated for and win an Academy Award, for Woody Allen's Vicky Christina Barcelona.


First introduced to American audiences in the Spanish films Jamon, Jamon and Belle Epoque, in 1998 she starred in her first English language film, The Hi-Lo Country for director Stephen Frears opposite Woody Harrelson, Patricia Arquette and Billy Crudup. In 1999, Cruz won the Best Actress award at the 13th annual Goya Awards given by the Spanish Academy of Motion Picture Arts and Sciences for her role in Fernando Trueba's The Girl of Your Dreams.


Confirming her status as Spain's hottest international actress, Cruz landed a series of coveted roles. She appeared in Billy Bob Thornton's All the Pretty Horses, Fina Torres' Woman on Top, Alejandro Amenabar's Open Your Eyes, Maria Ripoli's Twice Upon a Yesterday and Nick Hamm's Talk of Angels. Additionally, Cruz co-starred in Pedro Almodovar's Live Flesh and his critically acclaimed All About My Mother, which was awarded the Golden Globe® and Oscar® for Best Foreign Film.


In 2006, Cruz starred in Volver, which again teamed her with director Pedro Almodovar. Critically acclaimed for her role as Raimunda, she won the Best Actress awards at the European Film Awards, the Spanish Goya Awards and the Cannes Film Festival and received both Golden Globe® and Oscar® nominations.