Hollywood horror film The Echo will open on September 30 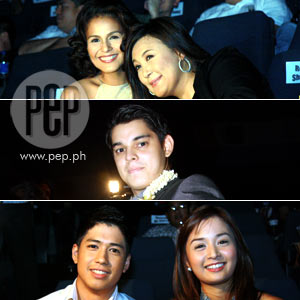 Iza Calzado (top frame, left) was very happy to have Megastar Sharon Cuneta as one of her guests during the Philippine premiere of The Echo. Richard Gutierrez (second frame) was part of the original Sigaw while Aljur Abrenica and Kris Bernal (both in third frame) also came that night to watch the horror film directed by Yam Laranas (not in photo).

Iza Calzado was overwhelmed by the show of support given to her by fellow celebrities during the premiere night of The Echo. This film, which was given a rating of PG-13 by the Movie and Television Review and Classification Board, will be screened starting September 30, 2009.


Sharon Cuneta, Richard Gutierrez, Kris Bernal and Aljur Abrenica were some of the stars who attended the premiere night of this film. Family members of Richard, namely Annabelle Rama, Eddie Gutierrez, and Ruffa Gutierrez, were also present that night.


Two years ago, she and director Yam Laranas were the only Filipinos that took part in the Hollywood version of the Filipino horror film Sigaw. The original film starred Richard Gutierrez and Angel Locsin as two people haunted by ghosts in a decrepit old building where Richard's character was staying.


During the September 22 premiere night that took place in SM Megamall, Richard made it a point to watch the film and express his support for the film.


Prior to the screening, the press interviewed Iza, who reprises her role as a housewife seeking for justice beyond the grave.


Aside from working on the Hollywood remake of Sigaw, Yam was recently tapped to be the first Filipino to helm the National Geographic documentary titled Asia's Titanic. CLICK HERE to read related article.

How different was it to work on Sigaw with The Echo?


Iza's scene as a battered wife was very shocking and moving that it even left an impact on the people who saw the scene in Toronto.

"That was the drama scene namin ni Kevin Durand who played the role of my husband," recalls Iza. "Two days yun e. On the first day, he was beating me up. But there was one guy who was part of the set, he had dinner with the family. He was told by everybody in his family, ‘why are you sad? We should be celebrating.' ‘Because I came from a shooting, I was so disturbed by the scene.'

Did Iza have a crush on Jesse Bradford in the past?


Jesse Bradford reprises the role of Richard Gutierrez but in the Hollywood, remake, he is an ex-con trying to rebuild his life after being released from prison. He is bothered by noises and apparitions coming from his next-door neighbor, a cop who beats up his housewife (portrayed by Iza Calzado) and his young child (Jamie Bloch).

How is he as an actor?

"He's really professional. There are only a couple of scenes I had with him. The most memorable one was the one wherein pababa ako galing sa ceiling. Tapos kailangan naming maghawakan, kasi parang ilang beses naming ginawa so parang nagrerest ako sa kamay niya. Tawa siya ng tawa, sabi niya, ‘this is cracking me up.'

PEP (Philippine Entertainment Portal) asked Iza if she got tired of waiting for The Echo to be shown here in the Philippines?

Before joining the Megastar in her seat, Iza asked Filipinos to support her film The Echo, which will be screened starting September 30, 2009.

"Please watch and support the first Filipino that is remake in a Hollywood production or setting. I hope that this will make you proud and aspire to have more films be remade or more Filipinos to Hollywood. Para din malaman nila kung gaano tayo katalented. Kung gaano kaganda ang mga Pinoy, di lamang pisikal, pero yung ating utak, yung kalooban. We have to be really proud of what we have and I hope na magtuloy tuloy na po ito. Kahit na sino pang gumawa nito kung magkaron pa tayo ng actors and actresses who have projects in Hollywood or wherever. Kumbaga maka-cross over tayo sa ibang mga cultures din para makilala nila tayo."


CLICK HERE to view photos during the premiere night.